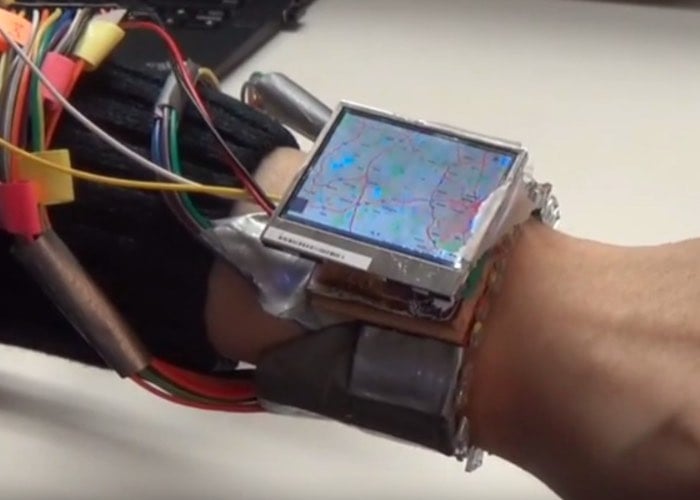 A new Arduino smartwatch prototype has been unveiled this week, which has been created by the Dartmouth-Led Team and transforms your wrist into a joystick.

Tomorrow the WristWhirl smartwatch project will be presented at the ACM Symposium on User Interface Software and Technology, and can be seen in more detail in the video embedded below.

Combining a ” TFT display and a plastic watch strap augmented with 12 infrared proximity sensors and a Piezo vibration sensor the smartwatch is connected to a Arduino DUE board. Its creators explain more about the project and its aims.

While other studies have explored the use of one-handed continuous gestures using smartwatches, WristWhirl is the first to explore gestural input. Technology like ours shows what smartwatches may be able to do in the future, by allowing users to interact with the device using one hand (the one that the watch is worn on) while freeing up the other hand for other tasks,” said Xing-Dong Yang, assistant professor of computer science at Dartmouth.

To develop the WristWhirl prototype, researchers investigated the biomechanical ability of the wrist by tasking a small group of participants to conduct eight joystick-like gestures while standing and walking. Participants wore the watch on their left wrist and were asked to use their wrist to make four directional marks similar to flicking a touch screen, and four free-form shapes, such as a triangle.

They were asked to make these gestures with their hand-up in front of their body during which they could see the gesture being drawn on the watch’s screen, and with their hand-down alongside their body. They were able to make directional marks at an average rate of half a second and free-form shapes at an average rate of approximately 1.5 seconds.

Visual feedback appeared to slow participants down, as they were slowest at performing the tasks when their hand was out in front of them and fastest when their hand was down alongside their body.
To measure the accuracy of the free-form paths drawn using Wrist-Whirl, researchers used the $1 gesture recognizer and found that it was able to recognize the marks with a 93.8 percent accuracy as compared to 85 percent accuracy by three human inspectors.

For more information on the new WristWhirl Arduino smartwatch jump over to the official website for details by following the link below.