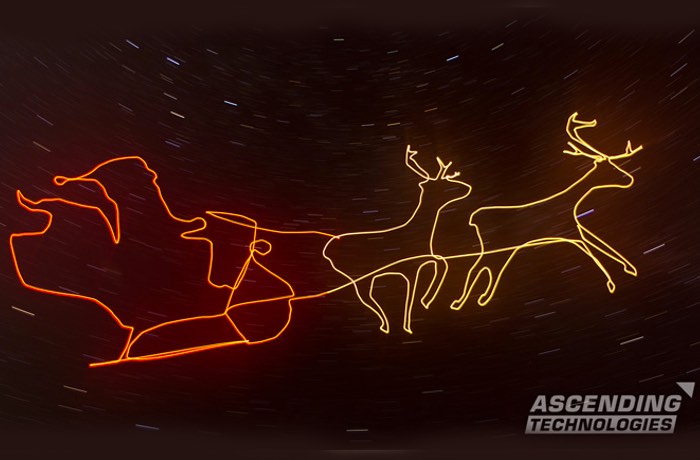 Ascending Technologies has this week released new videos of the first drone light paintings that are now available via YouTube to get you into the holiday mood.

To create the light pictures the modified AscTec Falcon 8 UAS drone was mounted with an LED and was then controlled using the flight planning software AscTec Navigator, check it out in the video below.

The world’s first drone light painting were shot while taking a long exposure photograph of every scene and up to ten minutes of exposure time was required say the production team and each painting is based on “a real drone flight. The Drone Light Painting Video is no fake”.

The creators of the awesome images explain more :

World’s first Drone Light Painting Video “The Christmas Edit”: With this film Ascending Technologies wishes to express its sincere gratitude to all drone enthusiasts and operators, friends, customers and partner companies. As well we wish you a Merry Christmas and a good takeoff into a successful New Year. The complete Light Painting project was performed by use of a modified AscTec Falcon 8 UAS drone.

Due to the excellent flight characteristics of the AscTec Falcon 8 it was possible to fly such complex lines through predefined waypoints as precise and to fly those flight paths several times with such accuracy. Actually all paintings of the Drone Light Painting Video – if Santa Claus and the reindeer sleigh, present with loop, Christmas tree with a big star, writings and snowflakes – have been produced with an AscTec Falcon 8 including AscTec Trinity control unit.