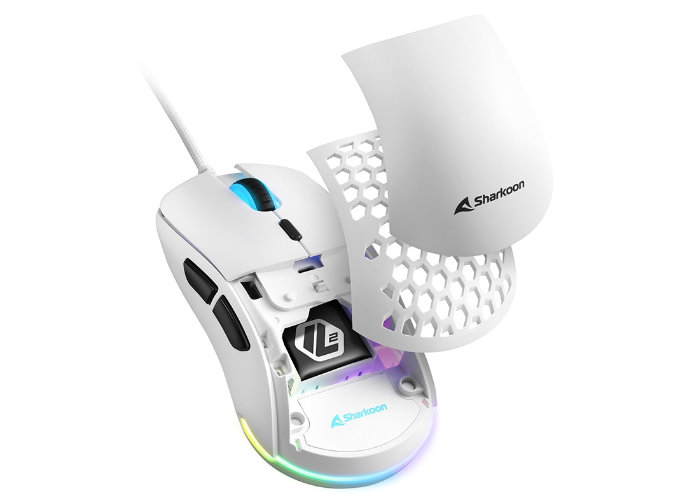 Sharkoon has this week launched their new $40 gaming mouse in the form of the Light 2 180 gaming mouse, the latest member of the Light 2 family. Sporting an extremely low weight the gaming mouse is equipped with a igh-performance PMW3360 sensor with up to 12,000 DPI and a symmetrical design with a honeycomb-structured upper shell.

Precision Equipment – So that the Light² 180 can be controlled accurately, the mouse is equipped with an optical PixArt PMW3360 sensor. With its maximum resolution of 12,000 DPI, this enables precise maneuvers. DPI settings can be adjusted along seven levels using the downloadable software. The levels can be selected at any time using the DPI switch of the mouse.

Unrestricted Room for Maneuver – So that nothing stands in the way of the uncomplicated use of the Light² 180, Sharkoon has not only focused on reducing the weight. Thanks to its three mouse feet made of 100% PTFE, the mouse glides smoothly over any surface. It should be thus possible to execute fast and fluid movements with high precision. The textile-braided cable, which is extremely robust thanks to its sheathing, provides additional flexibility.

Stylish Illumination – The Light² 180 sets colorful accents via the light strip at its rear, the mouse wheel, which is also provided with RGB lighting, and the illuminated Sharkoon logo inside the mouse. Thanks to the downloadable software, a wide variety of settings can be made with the lighting, enabling a high degree of customization.

Quality Switches and More – The downloadable software also allows the six buttons of the Light² 180 to be freely configured with different functions as well as recorded macros. In addition, Omron switches in the left and right mouse buttons, with a lifespan of over 20 million clicks, ensure the longevity of the mouse.

“On top of the solid build quality, the Light² 180 also has very nice buttons. In fact, the main buttons are highly reminiscent of older Zowie mice. Stiff, yet very tactile, those fond of the clicks of the older FK or ZA series from Zowie will feel right at home—by comparison, the clicks of the Zowie S1/S2 are lighter than those of the Light² 180. Zowie fans will also appreciate the two large and nicely gliding feet, and it’s always nice to see a manufacturer include a replacement set in the box.”

For an in-depth review of the new SharkoonLight 2 180 gaming mouse jump over to the Tech Power Up website by following the link below.