Windows Phone 8.1 is expected to be the next big Windows Phone update, and we’ve seen it getting leaked on a number of occasions.

One of the features that is expected to be a part of the update is the Action Center, or what we normally call the notification center that provides a quick way to access app notifications. According to a new report, it will be able to show up to 20 notifications from an app. 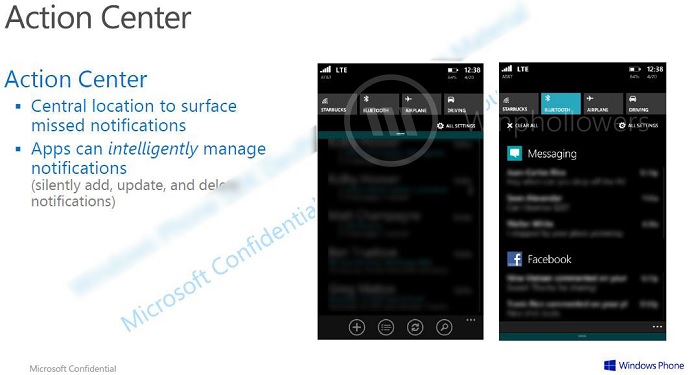 Not too long ago, we also saw a leaked video demonstrating the action center, and how it will work in the upcoming update. Basically, it will give users access to toggle quick settings such as WiFi, Bluetooth, Airplane more, etc. The action center will also house notifications from different apps, which is what many people want to know about.

Apart from the action center, the upcoming Windows Phone 8.1 update will also come with a voice assistant known as Cortana, which too we’ve seen already in a video.

Microsoft is expected to unveil the Windows Phone 8.1 at the Build 2014 conference next month in San Francisco, but I doubt there’s anything exciting left for us to witness about the OS. We’ll update you as soon as Microsoft officially unveils its latest operating system.