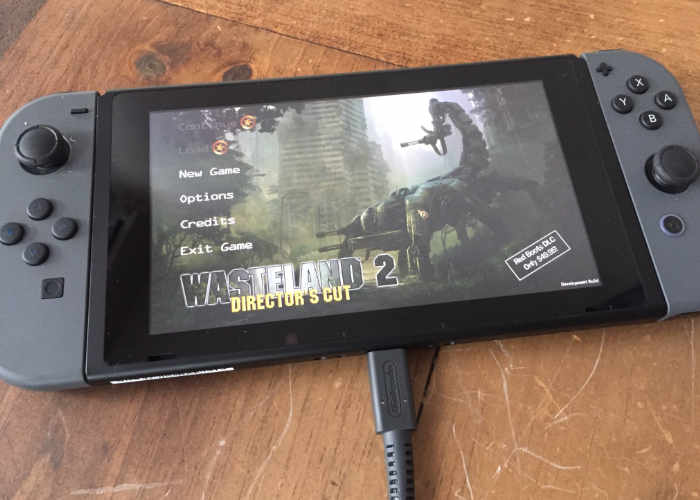 InXile boss Brian Fargo has taken to Twitter this week to tease the first images of Wasteland 2 Director’s Cut game booted on the Nintendo Switch games console. Wasteland 2 originally launch back in September 2014 and offers gamers a post-apocalyptic role-playing game which has been developed by inXile Entertainment, published by Deep Silver and distributed by Square Enix. Currently available to play on PC OS X, Linux, PlayStation 4, and Xbox One it now looks as though the game will be making its way to the Nintendo switch sometime during 2018.

Wasteland 2 is set in an alternate history timeline, in which a nuclear war between the United States and Soviet Union took place in 1998 in relation to an impact event involving a cluster of meteors that sparked a global nuclear war. On the day of the cataclysm, a company of U.S. Army Engineers were in the desolate southwestern desert constructing bridges in an area with a number of small survivalist communities and a newly constructed federal death row prison with light industrial facilities. The soldiers sought shelter in the prison, expelled the inmates, and invited nearby survivalists to join them shortly thereafter. Years later, together they formed “the Desert Rangers, in the great tradition of the Texas and Arizona Rangers”, to help other survivors in the desert and beyond it.

As soon as more details about a confirmed release date for Wasteland 2 on the Nintendo switch is announced we will keep you up-to-date as always.

How about a little tease… pic.twitter.com/Zwh8gL8cQL