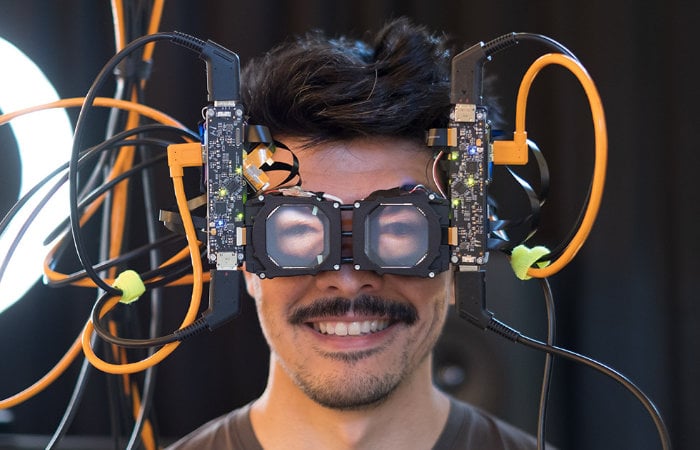 This week researchers at Facebook have demonstrated VR headset reverse passthrough technology showcasing a prototype at SIGGRAPH 2021. Facebook Reality Labs researchers Nathan Matsuda, Joel Hegland, and Douglas Lanman, have provided more details on the system including video and images. The illusion of seeing eyes on the outside of the virtual reality headset has been created using a light-field display on the outside of the headset. The microlens array in the system allows multiple observers to correctly see the depth cues no matter which angle they are standing from the VR headset.

“We introduce reverse pass-through VR, wherein a three-dimensional view of the wearer’s eyes is presented to multiple outside viewers in a perspective-correct manner, with a prototype headset containing a world-facing light field display. This approach, in conjunction with existing video (forward) pass-through technology, enables more seamless interactions between people with and without headsets in social or professional contexts. Reverse pass-through VR ties together research in social telepresence and copresence, autostereoscopic displays, and facial capture to enable natural eye contact and other important non-verbal cues in a wider range of interaction scenarios.”

Although it looks like you are seeing a real image of the users eyes the system uses eye tracking data applied to a 3D model of the users face, possibly causing issues on how realistic the model can be due to the need to acquire facial images for each individual.