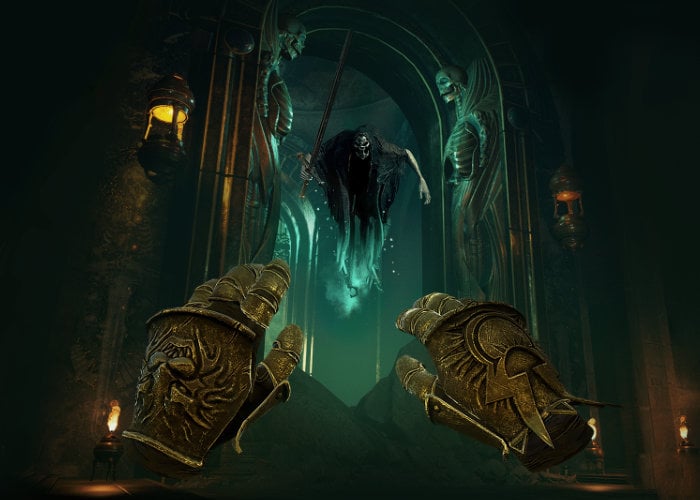 A teaser trailer has been released for the new VR adventure game Warhammer Age of Sigmar: Tempestfall, providing a first glimpse of what you can expect from the game currently being created by Carbon Studio, ready for launch sometime during 2021. The virtual reality adventure game is set in the Warhammer Age of Sigmar universe and will be available for PC VR headsets via Steam.

“Become a mighty Lord-Arcanum, wielder of storm magic, and lead a Stormcast Eternal task force to recover your brethren’s lost souls. Walk the lands of Shyish and battle forces of Nighthaunt using a variety of melee weapons, powerful staves, and motion-based abilities and magic. Descend in thunderous Tempestfall and deliver justice in the name of Sigmar. Walk the realm of death and lead your brethren to utter victory in this VR-exclusive Warhammer Age of Sigmar game. Wield melee weapons and powerful staves, use motion-based abilities to combat hordes of Nighthaunt.”

“Tempestfall’s setting is one of the newer eras of the Warhammer series, trading in 40K’s metal crunch for a more supernatural angle. In the game, players will take on the role of a magic-wielding warrior, a Lord-Arcanum, and battle the ghostly Nighthaunt in the realm of Shyish as part of a taskforce known as the Stormcast Eternals. Expect first-person combat with spooky demonic foes, driven by a gesture-based weapons system players of Carbon’s older games may be familiar with.”