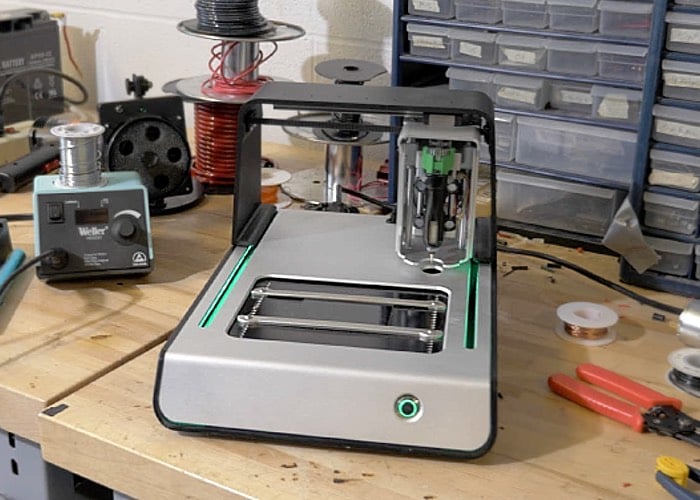 Developers and makers that enjoy building electronic circuits and boards may be interested in a new circuit board prototyping machine called the Voltera V-One.

The Voltera V-One has been specifically designed to help make circuit board prototyping even easier and allows users to go from concept to creation in just minutes.

Removing the need to use dangerous chemicals or send your concept to a fabrication house possibly delaying the continuation of the project by weeks. Watch the video below to learn more about the Voltera V-One which has taken to Kickstarter to raise the required $70,000 in funds it requires to go into production.

“The Voltera V-One can create a prototype board right from your work bench. Gerber files go in; FR4 boards come out.  The magic happens in the middle… the printer lays down a conductive ink to create the traces and an insulating ink as a mask between layers.

These boards aren’t meant to replace mass manufactured PCBs – this is a prototyping tool that helps you get  there faster. How many times have you tossed out a board because you used the wrong footprint or because you forgot a pull-up resistor? If you’re anything like us… more times than you’d like to admit. Now you can quickly test an idea without wasting money or two weeks of your time!

But what if you have ten or twenty traditionally fabbed boards that need to be populated?  Did we mention that the printer is also a solder paste dispenser and can reflow as well?  Handy!”

For more information on the new Voltera V-One jump over to the Kickstarter website for details.