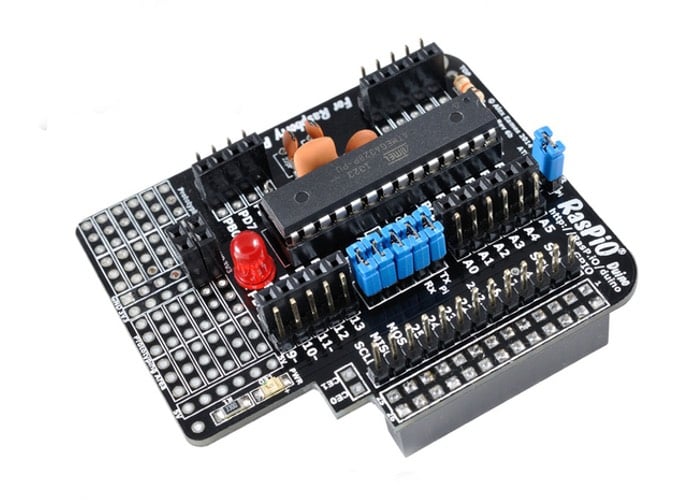 Makers, developers and hobbyists that enjoy using the Raspberry Pi mini PC and would like to learn more about the Arduino platform. Might be interested in a new development board that has been created by Alex Eames at RasPi.TV in the form of the RasPiO Duino.

The RasPiO Duino has been developed to make it easy to program Arduino projects using your Raspberry Pi and is equipped with a ATMEGA328P. 32KB flash 20MHz microcontroller. Watch the video below to learn more about the RasPiO Duino board from its creator and see it in action.

The RasPiO Duino project is currently over on the Kickstarter crowd funding website looking to raise enough pledges to make the jump from concept to production. Features of the RasPiO Duino include :

– 6 analog inputs for reading sensors (light, temperature, pressure etc.)
– 14 digital input/output pins for controlling and switching things
– 6 PWM outputs for variable LED brightness or motor speed control
– Can control up to 12 servos
– Can exchange the microcontroller as it is socketed
– Fits on the GPIO header and is programmed directly from a Raspberry Pi
– Uses the Arduino Integrated Development Environment for programming

“I want to get you into the wonderful world of Arduino programming, using your Raspberry Pi as the programmer. There’s so much you can do with the ATMEGA 328 microcontroller – it complements the Pi perfectly and for many applications it doesn’t even need to be connected to the Pi, once it’s programmed. So I’ve designed the RasPiO Duino

But I don’t want to just throw hardware at you and let you drown. I want to bring you a set of supporting materials to ensure you have a positive experience – even if you’ve never done these things before.

So there will be a set of structured experiments that will lead you through how to use it in a way that you will enjoy.”

So if you think RasPiO Duino is something you could benefit from, visit the Kickstarter website now to make a pledge from just £9 and help RasPiO Duino become a reality.