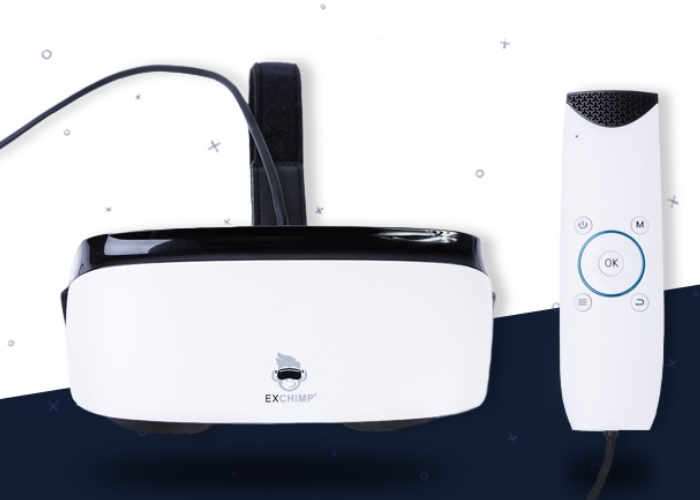 A new all in one virtual reality headset called the EXCHIMP AI1 is trying to follow in the successful footsteps of the Oculus Rift, and has this week launched its Kickstarter campaign to raise the required funds to go into production.

The EXCHIMP AI1 has been specifically designed to bridge the gap between low-cost and high-end virtual reality headset with QHD display and handheld controller.

Watch the demonstration video below to learn more about its inspiration and design which provides support for both Google’s Android mobile operating system and the Google play store. The development team headed by Stefan Ponsold based in Sunnyvale California explains more about the EXCHIMP AI1 VR headset.

You want to immerse yourself completely in VR? But you don’t want to spend a fortune on a VR system from Oculus, Sony or HTC? And you want to have a higher quality as any low-cost solutions that work with your mobile phone? Then the EXCHIMP AI1 VR headset it the ideal solution for you!

You don’t need a computer or a game console for using EXCHIMP AI1 as this all-in-one VR system includes pre-installed content such as games and videos out of the box (based on stretch goals). Additionally you can download any VR game or app from the Google Play Store via Wi-Fi. With the internal memory of 16 GB there is enough space for all your VR content and you can pimp it with a Micro SD card.

The big disadvantage of all-in-one virtual reality headsets results in carrying everything on your head, not only display and sensors but also processor and battery. But that’s not necessary! Therefore, we decided to take the heavy parts from the headset and put them in a separate control bar which fits perfect in the palm of your hand. So, the headset itself weights only 389 grams.  Another major advantage of having processor and battery in the control bar, is that the headset does not develop any heat compared to head mounted smartphones.

For full specifications and to make a pledge from €299 for super earlybird backers with delivery expected to take place during September 2017, jump over to the official Kickstarter campaign page by following the link below.