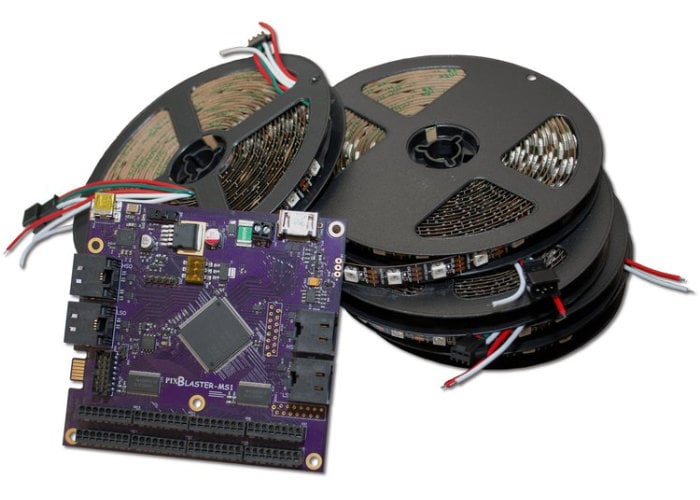 Do you fancy building a huge video monitor using LED strips? If you do then the Pixblasters Video LED Controller currently available via Crowd Supply might be worth more investigation. The controller allows you to combine LED strips to create a huge display that acts as a regular video monitor, offering a wealth of applications. Check out the demonstration video below to learn more about the Video LED Controller.

The Pixblasters MS1 video LED controller connects to any computer and any operating system (as an ordinary monitor) to display the user-selected portion of the monitor image on up to 16,384 LEDs at 60 frames per second (FPS). Multiple daisy-chained Pixblasters MS1 controllers can drive high-resolution LED displays built of hundreds of thousands of perfectly synchronised LEDs.

The Video LED Controller is available from $219 with free shipping included throughout the United States and worldwide shipping available for $15 extra. The controller can be pre-ordered now with delivery expected to take place during February 2020.

“Due to their high cost and complexity, huge, shiny, beautiful video displays with thousands of LEDs have always been out of reach of enthusiasts and small business owners. Pixblasters MS1 changes all of that. Pixblasters MS1 enables DIY enthusiasts and signage professionals, even those with minimal technical skills, to turn a bunch of addressable RGB LED strips into immense video LED displays. This FPGA-based LED controller enables new levels of professional-grade digital signage that cannot be attained by standard LED modules. The LED strips can be curved and glued to different surfaces to form giant yet economically viable video installations that can span entire buildings.”

– Easy to use with any computer, any OS: Pixblasters connects to any computer as an ordinary external monitor, with no programming needed. You can use it with Raspberry Pi, PC, media boxes, phones, etc. Simply plug in the monitor cable and the controller will smoothly drive the LEDs at the maximum frame-rate of 60 fps.
– Straightforward display content and management: Anything that shows in the selected part of monitor image shows on the LEDs as well. No need for special software for anti-aliasing or fonts. Use any digital signage software and add layered screen divisions, text, animations, video, RSS… LEDs work at their maximum speed and are perfectly synchronized, no matter the number of LEDs and chained MS1 controllers, or the display size.
– Display size and resolution: A single MS1 can control 4.7/17.7 m² (~ 50.6/190.5 ft²) while daisy-chained MS1s can control an LED display of hundreds of square meters using thirty to sixty LED strips. Daisy-chained controllers that drive a total of 16,384 LEDs can support HD LED displays.
– Remote controllable and customizable: Control it remotely from anywhere in the world through the network interfaces of the driving computer. Don’t worry about the LED display’s architecture. Users with special display applications (such as big, real-time timetables and scoreboards) can develop custom software for a computer monitor.
– Open source FPGA demo: Use the hardware platform for experimenting with, and learning about, driving RGB LEDs. Note: the open source FPGA demo design supports a subset of the fully-featured Pixblasters MS1 LED controller.