Firstly: Woah! Second: The detail is incredible. Third: You should read this whole post to learn how it was made. Okay, let’s get started. Seen below is the famed Anti-Materiel Rifle from the Halo universe, a dread weapon that has done its fair share of alien extinguishing during the protracted Human-Covenant War. 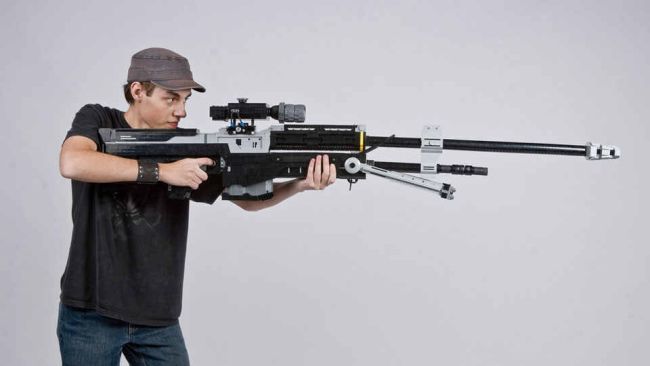 To be specific, this sniper rifle was the type used to devastating effect on Halo:Reach. You know, the part where you’re walking on the edge of a cliff at the dead of night, scouting for some action?

So this guy Eric Jensen decides to put his mad Lego skills to the test. In four months he assembles the rifle complete with working parts. The magazine is detachable, the bipod folds, plus you can even cock it and peer through the elaborate scope. What it can’t do is fire high-caliber bullets.

Also, on some pictures the barrel is sagging, this means Jensen hasn’t installed a proper support for the barrel assembly. Never mind, it still looks good anyway. Now if he can only build the entire Spartan arsenal from reach and maybe a Mjolnir suit as well. He’d be bulletproof. Not literally, but in an imaginary Halo: Lego sense.