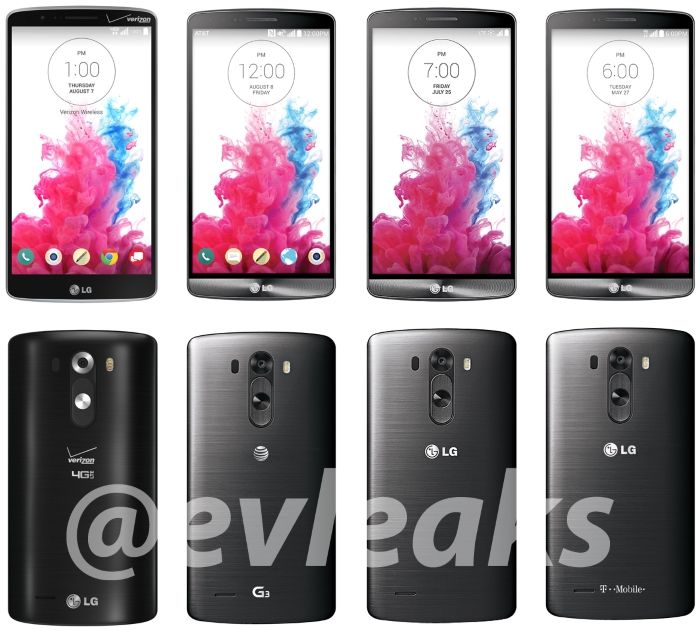 LG G3 is all set to launch on all major US carriers. Currently, T-Mobile is taking pre-orders of the device and is set to launch on 16th of July. It’s not just T-Mobile, Sprint has also announced its LG G3 version, which will launch a few days after T-Mobile, that is, July 18th.

LG G3 will also launch on Verizon and AT&T, but there’s no word from both carriers about its availability. Recently, @evleaks shared a group photo of the LG G3 for all four carriers — Verizon, AT&T, Sprint and T-Mobile — and shows a pretty interesting thing about the Verizon variant.

If you take a closer look at the image above, you’ll spot a noticeable difference in the Verizon version when compared with others. It’s more dark, and it seems the handset will hit retail in black color when it comes to the Big Red. Spec-wise, we don’t thing it will offer anything surprising, so we are still looking at a 5.5-inch display sporting a resolution of 2560 x 1440 pixels.

There’s a quad-core Qualcomm Snapdragon 801 processor and a 13MP camera for photos and videos with a laser auto focus. There’s no word if it will be the version that comes with 2GB or 3GB of RAM, but we’re hoping it will be the higher RAM version. The 3GB RAM version also features more storage — 32GB with a microSD card slot of expansion. There’s a 3,000 mAh battery as well as Android 4.4.2 KitKat as its operating system.

We’ll update you as soon as Verizon and AT&T announces the availability date for the handset.