Earlier, we shared the on-contract pricing details for Samsung Galaxy Note 3 in UK as well as the price for the unlocked version. The device will go on sale for a whopping £599 off-contract, with a variety of plans for the on-contract version on various carriers including EE, T-Mobile and Orange. 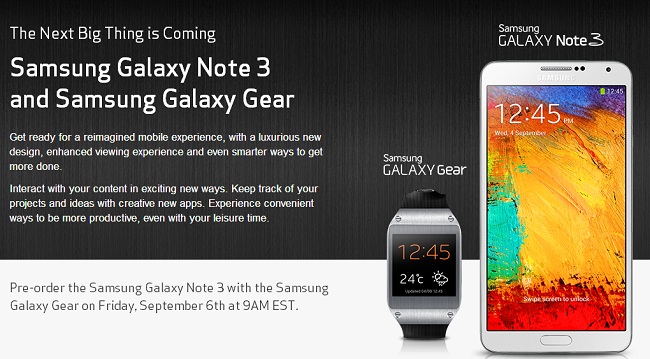 If you are based in United States, you should know by now that all five major US carriers will carry the device including Verizon, AT&T, T-Mobile, Sprint and US Cellular. Almost all the carriers have created the sign-up pages for the device, but Verizon mentions that Samsung Galaxy Note 3 and Samsung Galaxy Gear will be available for pre-orders starting 6th of September at 9AM EST.

There are no details about the pricing and availability of the device as of now, but Samsung announced that it will hit over 140 countries starting September 25. AT&T and T-Mobile have created sign up pages for the launch of Samsung Galaxy Note 3.

The device will come in two versions: a 4G LTE version supporting 2.3GHz quad-core Snapdragon 800 SoC while the 3G version of Galaxy Note 3 will be equipped with the Exynos 5 Octa chipset.

Stay tuned, we will let you know if we hear anything about the pricing of the device for US.