To date, fish for consumption are bred in large pens, thus making it easier come harvest time. This might not prove a sustainable process so the Velella Research Project is currently testing a new method involving an Aquapod. As pictured below, it’s a hexagonal submersible structure that moves with the ocean current. It’s still a prototype though and has no concrete results indicating it’s a viable replacement for traditional saltwater fish farming. 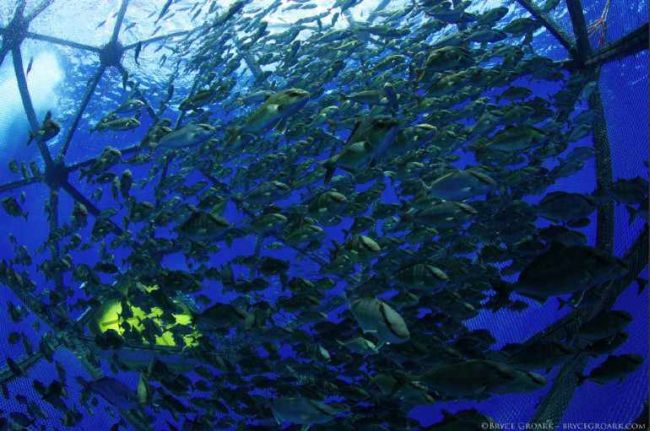 The Aquapod is currently being tested off the Hawaiian coast where it’s moored to a boat. This allows scientists to monitor whether the caged fingerlings (seen above are Kampachi fish) inside the Aquapod are doing fine and populate accordingly. There’s a smidgen of opposition to the experiment though, as a local environmental group aren’t exactly convinced that the Aquapod is a good idea.

If the lone Aquapod works well enough, it may possibly motivate further testing on a larger scale. The ultimate goal is to raise fish on numerous Aquapods—an underwater fleet of them—and leave them to drift, though the pods will be traceable via GPS. They’ll be tethered to a buoy or ship as well, since an Aquapod drifting in an ocean won’t be easy to find.

Here’s a video of the Valella Research Project’s work: