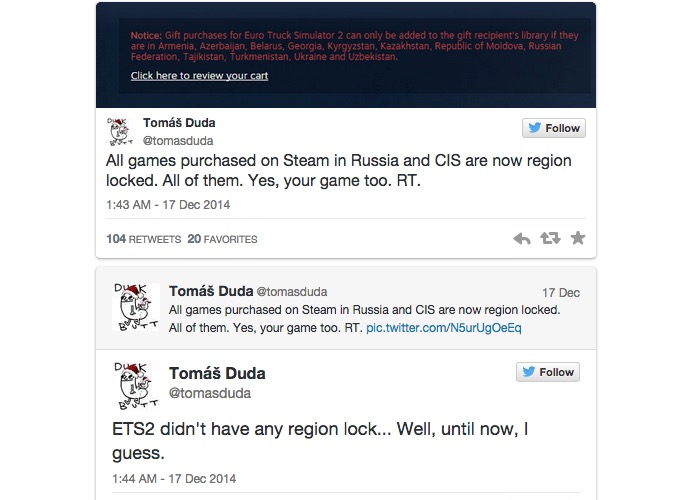 With the collapse of the Russian ruble currency this week, Valve has taken steps to stop low currency value game purchasing exploiters taking advantage of lower prices in other countries and has now started Steam region locking PC games to help developers not lose out.

The PC game region locking will now mean that any games purchased from the Russian Steam game store will be region locked and will be required to be played in Russian states, as you can see stated in the red text in the screenshot above.

Previously gamers were able to purchase a Russian game on Steam for just a few dollars as opposed to the $40 and above prices that the same game were available to purchase for in the US Steam online store. Also previously PC games were not subjected to region locking as were console games, causing outrage amongst PC gamers.

Steam region locking will now also be implemented into other Steam stores located in Brazil, Indonesia and their neighbouring areas reports Engadget. For more information on the new Steam region locking jump over to the NeoGAF website for details and the discussion about the implementation this week by Valve. To aid developers and restrict the exploits of Steam gifting that was used unscrupulously to purchase games in other countries for a fraction of what they were being charged for in the US and throughout Europe.