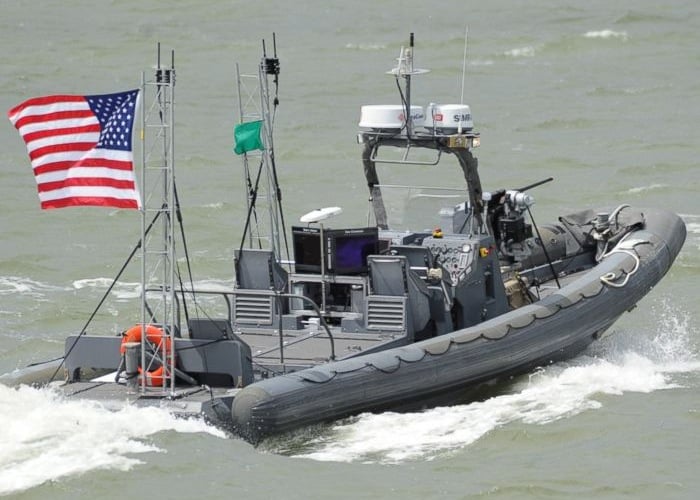 As the development of Skynet edges closer and closer on a daily basis, the US Navy has this month unveiled a new robotic Autonomous Swarm Boat that is completely unmanned and capable of making movement decisions on its own.

In the video below the new US Navy Autonomous Swarm Boats are demonstrated and have been designed to provide Naval warfighters with a decisive edge, using a multitude of unmanned Navy vessels to overwhelm an adversary, say the US Navy.

The demonstration that took place on the James River in Virginia during the first two weeks of August, 2014, shows just how manoeuvrable the new Autonomous Swarm Boats are.

Program manager Robert Brizzolara at the Office of Naval Research, explained the boats can autonomously decide for themselves the movements they are required to make, depending on that main vessel’s movements and those of other nearby vessels.

The US Navy Autonomous Swarm Boats comprise of rigid-hull inflatable patrol boats that are fitted with .50 caliber machine guns that are controlled by human operators and can be fired remotely is required.

Rear Adm. Matthew Klunder chief of naval research explained more about the attack by a small boat loaded with explosives that killed 17 sailors and injured 39 on the USS Cole warship :

“I never want to see the happen again,”-“I can tell you the systems we just put out on the water would’ve prevented the Cole.”-“We’ve really put our sailors back where they need to be anyway, which is back manning our combat systems, manning our weapons systems, steering our ships,”

The new US Navy Autonomous Swarm Boat kit allows any small US Navy patrol boats to be fitted with robotic control and will be rolled out to fleet commanders within a year explained Klunder at the cost of about $2,000 each.