A lot of crazy stuff goes down at venerable Johns Hopkins University. Since this is the verge of a new year, however, a project initiated by two professors could not have come sooner. Richard Conn Henry, an astrophysicist, has been in cahoots with his economist colleague Steve Hanke to bring forth the calendar to end all calendars. It’s a calendar so precise, each and every year is going to unravel with uniform precision. Is this even possible? 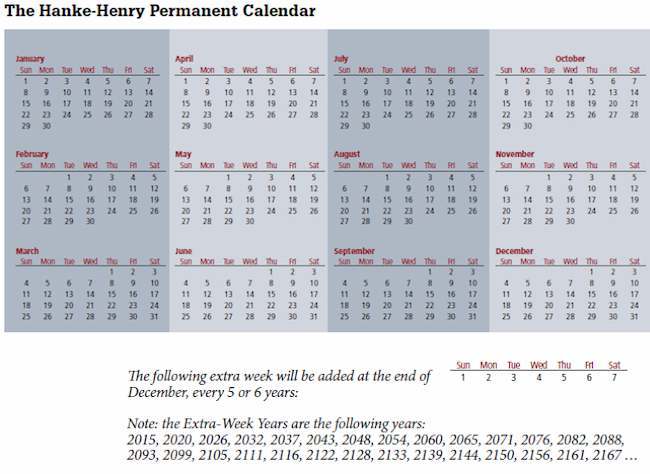 It is and the system called the Hanke-Henry Permanent Calendar (see above) isn’t even radical, just consistent to a fault. Citing efficiency as the biggest pay off if the calendar is applied on a global scale, Henry and Hanke expect nothing less than the whole world to come under its dominion…at some point.

According to a news report:

Every third month on the new calendar would have 31 days, with the rest of the months having 30, for a total of 364 days. They would drop the quadrennial 366-day leap years entirely in favor of an extra week at the end of December every five or six years.

The pair say their calendar is different from other alternative calendars proposed in the past because it keeps each week at seven days.

Oh well, it’s just another one-world globalist scheme anyway. What’s next, one world government so everyone will be friends?