Thanks To DARPA, that shadowy organization preoccupied with military tech for the day after tomorrow, the AeroVironment enginners have succeeded at building the nimblest UAV imaginable: a flying hummingbird. 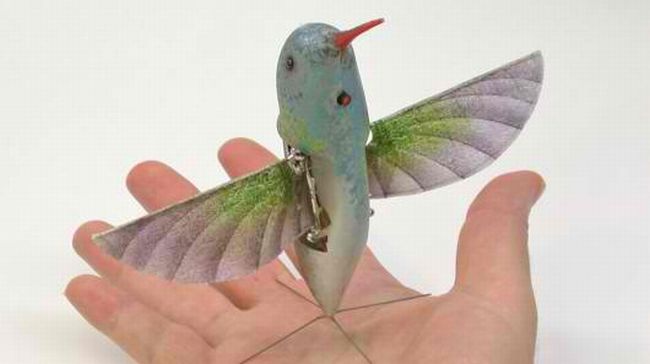 Actually what you see above is a fake ‘skin’ that just adds to the aesthetic appeal to the robot, which is much heavier than a real hummingbird but way smaller than the largest of the species. This concept demonstrator of the Nano Hummingbird is the current darling of the AeroVironment team behind it.

The major leap we’re referring to is the breadth of capabilities the robot prototype/concept is capable of making. It can go full 360 and perform other mind-blowing maneuvers previously thought impossible among flying robots. It can also pack a camera.

As part of DARPA’s Phase II contract, the Nano Hummingbird had a pretty tall order to fill, including flying through doorways, hovering, and remote control piloting via a video screen alone. The Nano Hummingbird exceeded all these thanks to the ingenuity of her creators. As for its industrial/commercial applications, the Nano Hummingbird still has some ways to go before it’s ready for real world rigours. Developing this machine was no mean feat, with research and design going back more than two years ago.