This soon-to-be released submarine for the bored rich is being touted as the “world’s first underwater limousine”. We’re thinking plopping down some money on the latest C-Explorer 5 is a good idea if you’ve got an island villa off Dubai. Endangered sharks and supertankers aside, the waters of the Persian Gulf are nice to submarine around in. 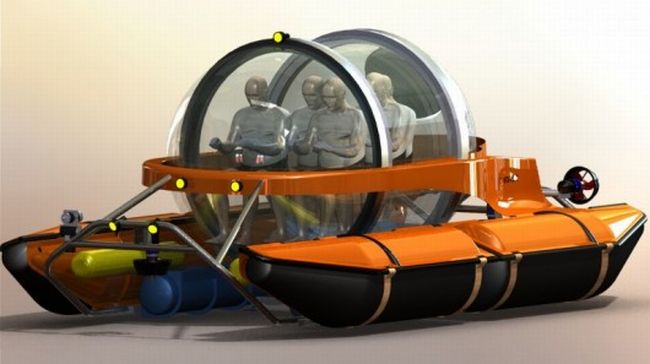 Unless of course, you’re suddenly chased by a surface vessel after being mistaken for an Iranian sub lurking in U.A.E. waters. But this is another story residing in the world of speculation. What isn’t speculative is the C-Explorer 5 minisub is the latest from U-Boat Worx, which will be unrolling the C-Explorer 5 as an extension of their C-Quester line. The sub’s design and hardware marks a departure from U-Boat Worx’ past work largely because of the extra passenger space—the C-Explorer 5 carries four plus the pilot.

Four 5 KW electric motors propel the sub at an easy pace of 2.5 knots underwater, double that on the surface. If submerged, the C-Explorer 5 can swim with the fishes for up to eight hours.

The $1.25 million sub is being marketed to the moneyed and those tropical resorts that would like to offer underwater tours. We’d actually like one ourselves to look for Spanish galleon wrecks in the Caribbean.