As the Samsung Unpacked event draws closer, more and more leaks about the alleged Samsung Galaxy S5 are popping up all over the internet.

Now, we’ve got some more details about the alleged handset, thanks to the unexpected appearance on AnTuTu. Surprisingly, there were two versions of the device with a little difference in specifications. 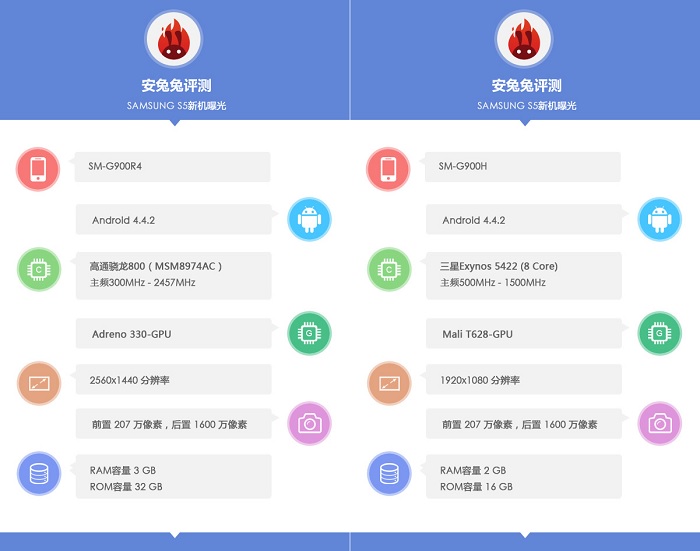 If you can’t recall, a know analyst Ming-Chi Kuo predicted that Samsung Galaxy S5 will come with two versions, and it seems he could be correct. According to the listings spotted on AnTuTu, there are two versions of the alleged Samsung Galaxy S5 with model numbers SM-G900H and SM-G900R4. What’s more surprising is the specifications listed in the benchmarks are almost the same as the ones predicted by Kuo.

Let’s start with the SM-G900R4, which appears to be the high-end model, or what Kuo called “Prime.” The SM-G900R4 will come with WQHD display with a resolution of 2560 x 1440 pixels, and is powered by a Qualcomm Snapdragon 800 (MSM8974AC) chipset with a clock speed of 2.5GHz with Adreno 330 GPU.  Other features include 3GB of RAM, 32GB storage, 16MP camera rear camera with a 2.1MP front-facing camera and runs Android 4.4.2 KitKat pre-installed out of the box. The device managed to score 31,843 points in the benchmark, which is even lower than the Galaxy Note 3, but it’s due to the WQHD display of the Samsung Galaxy S5.

On the other hand, the SM-G900H is supposed to be the standard model with Exnoys 5422 SoC and a 1080p display, 2GB of RAM, 16GB internal storage and Android 4.4.2 Kitkat as its operating system. The standard version managed to 35,445 points in the benchmark, which is more than the prime version as well as the Samnsung Galaxy Note 3.

Samsung is expected to unveil the highly rumored Samsung Galaxy S5 at its Unpacked press event on 24th February in Spain. We’ll update you as soon as the Korean OEM makes things official.