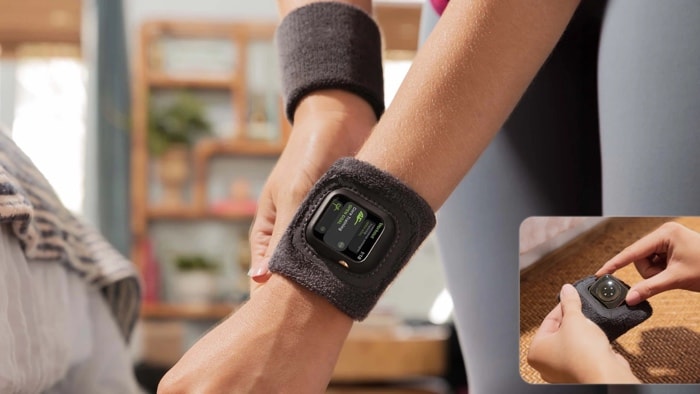 Twelve South has launched a unique watch strap for the Apple Watch, the Twelve South ActionBand, and the strap is designed to be used for sports and fitness.

As we can see from the photos, the Twelve South ActionBand takes its design inspiration from a wrist sweatband, the strap is made from terry cotton and is designed to absorb sweat whilst you are working out.

ActionBand is the world’s most comfortable, wrist-friendly way to work out with your Apple Watch. Seriously. These soft, flexible terry cotton bands hug your wrist, absorb sweat and keep your hands dry while you close your rings. ActionBand has a protective frame to keep Apple Watch safe, secure and pressed against your skin to track your progress. By dedicating ActionBand to your Apple fitness routine, post workout, your favorite Apple Watch band will still be clean and dry. How refreshing is that? ActionBand includes one pair of machine-washable wristbands, one with an Apple Watch frame, one without. Spoil your wrist. Order ActionBand today.

The new Twelve South ActionBand is compatible with the Apple Watch Series 4, Series 5, Series 6, and the SE, and both the 40mm and the 44mm models, it retails for $29.99. You actually get two bands, one for the Apple Watch and then a plain one for the other wrist.