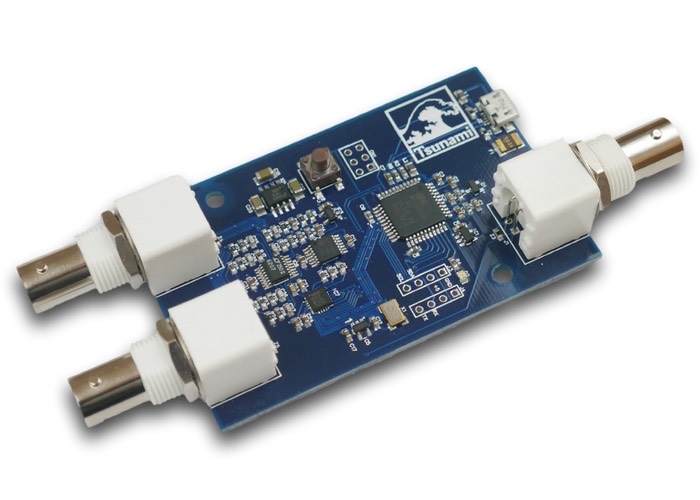 Makers and developers that enjoy building projects using the Arduino platform might be interested in a new experimenters kit called the Tsunami, which has been created by Nick Johnson who is based in London.

The Tsunami takes the form of a powerful and flexible signal generator and analyser which has been specifically built to be used with Arduino. Watch the video below to learn more about this new development board from its creator.

The Tsunami project is currently over on the Kickstarter crowd funding website looking to raise £10,000 in pledges to make the jump into manufacture. Nick explains a little more :

“The Tsunami is a powerful and flexible signal generator built on the Arduino platform. It’s the best way to get started experimenting with analog signals, and a great tool for a huge variety of tasks, too.

We’ve taken the versatile processor behind the Arduino Leonardo, and combined it with a Direct Digital Synthesis chip, which makes generating analog signals incredibly straightforward. Then, we’ve added on flexible input and output circuitry, and an easy to use software library, to make working with analog signals as easy as blinking an LED.

We’ve also tried to think of all the other tasks you might want to use the Tsunami for, from testing your audio equipment to communicating over the radio, and added the features you’ll need to get them done. Along with the board itself, we’ll be releasing a huge library of example code and ready-to-go applications that mean you don’t even have to know how to code in order to put the Tsunami to work.”

So if you think Tsunami is something you could benefit from, visit the Kickstarter website now to make a pledge and help Tsunami become a reality via the link below and make a pledge from £35 to be one of the very first to own one.