What would you give to put down that joystick and be in simultaneous running and jumping with your adventure game characters? 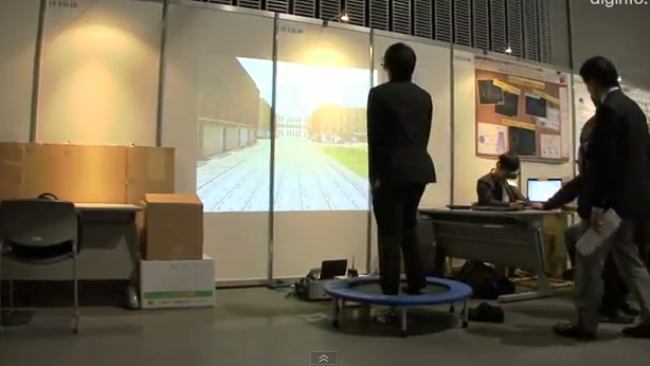 I don’t know about you, but I see your mom getting pretty excited about the idea of you exercising. Researchers from Tsukuba University created a game interface planted on a trampoline that lets you control your characters through actual feet movements.

“We’ve developed this system to make exercise less intimidating for people who aren’t used to it. Exercise in a trampoline has less impact on the legs and back than exercising on the floor,” says Kenji Mukai Entertainment from the Computing Lab of University of Tsukuba.

“We though that combining exercise on a trampoline with a virtual space might be a way to make exercise fun, ” he continues, “and that’s how we’ve developed this system.”

The trampoline detects jumping, forward, backward and sideways motion. It also changes direction with the direction your feet is pointed.

It does this with infrared range sensors that can detect heel and toe movement. A separate sensor in front of it detects which direction the player is turned. Using this information, the game interprets how to move the in-game point of view.

The researchers wish to use the trampoline to make exercise more enjoyable. It also beats Kinect in a way because of the soft surface for your feet.

The system is still under development but they hope to take it out to field tests real soon. They see its potential to be used in the homes of those people who don’t get regular exercise like senior citizenens…or you there holding that controller.