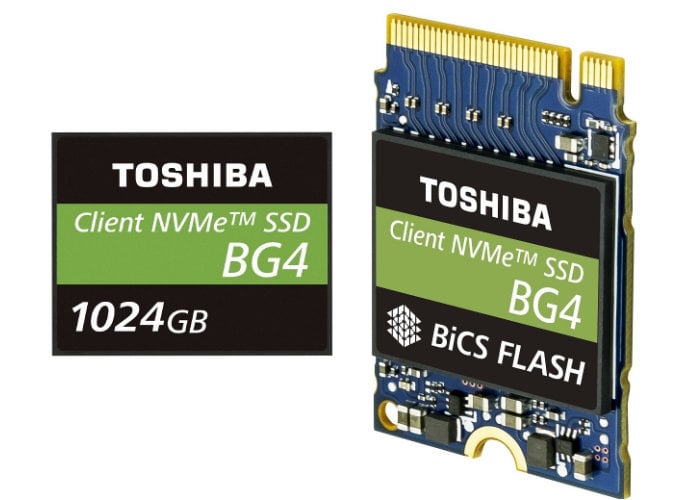 The new BG4 series of single package NVMe SSDs offers capacities up to 1,024GB and are equipped with 96-layer 3D flash memory and an all-new controller into one package. Delivering industry-leading random read performance up to 380,000 IOPS says Toshiba. The BG4 SSDs are built upon the NVM Express Revision 1.3b specification and feature optional self-encrypting drive (TCG Opal version 2.01) models.

“Additionally, the BG4 series improves upon the prior generation BG3 series in sequential and random write performance by approximately 70% and 90% respectively. Furthermore, power efficiency was improved up to 20% in read and 7% in write by utilizing Toshiba Memory’s cutting-edge BiCS FLASH 3D flash memory and a new SSD controller.

The BG4 single package SSDs have been specifically designed for compact and performance-oriented systems, such as ultra-thin PC notebooks, IoT embedded systems and server boot in data centers. The BG4 series is currently sampling to PC OEM customers in limited quantities, with general sample availability expected later in the second calendar quarter of 2019.