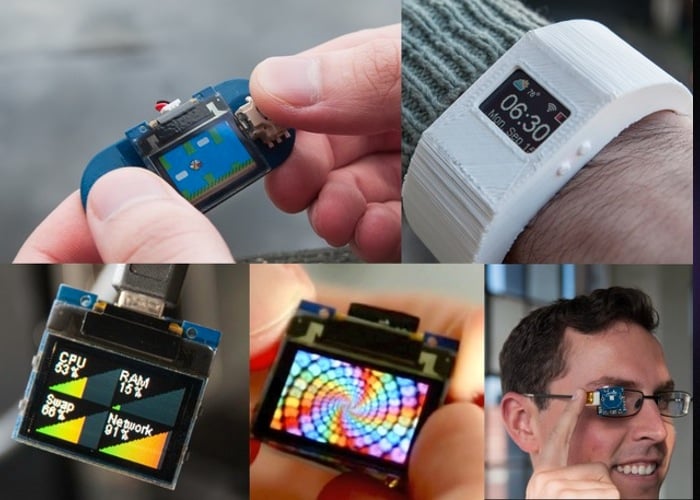 Makers and developers that enjoy building electronic projects might be interested in a tiny new colour display that has launched over on the Kickstarter crowd funding website this week aptly called the TinyScreen that has been made for the TinyDuino platform.

The TinyScreen is a color OLED display that measures just 25.8mm x 25.0mm in size and offers a 96 x 64 pixel OLED display with 16-bit color depth. Watch the video after the jump to learn more about the TinyScreen project and see it in action.

TinyScreen has been specifically designed to be used to display information from the TinyDuino platform, allowing users to add a variety of sensors and components to add extra functionality to their projects. Its creators explain a little more :

“With TinyScreen there are several default apps that will work right out of the box – like a Smart Watch app, a Video player app and a video game app.  You can use these default apps with NO PROGRAMMING AT ALL!

Create your own smart watch using TinyScreen.  The watch can be configured to use several different watch faces, and can use Bluetooth 4 (also known as Bluetooth Low Energy and Bluetooth Smart) to communicate with your smart phone (Android 4.3+ and iOS 7+).

We have an open source app developed for both iPhone and Android that will allow you to configure the notifications that you can receive and display on the watch, like incoming phone calls, incoming texts, tweets and appointments.”

The TinyScreen project is currently over on the Kickstarter crowd funding website looking to raise enough pledges to make the jump from concept to production.

So if you think TinyScreen is something you could benefit from, visit theKickstarter website now to make a pledge and help TinyScreen become a reality.