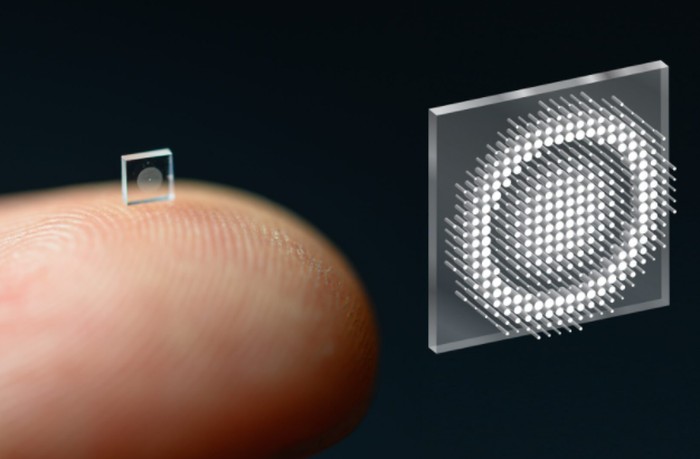 Researchers from Princeton and the University of Washington have created a tiny camera the size of a salt grain using Neural Nano-Optics, capable of capturing stunning images. The camera measures only half a millimetre in size and uses optical metasurfaces with machine learning to produce high-quality color imagery.

The researchers employed neural nano-optics to create the tiny camera which combines optical metasurfaces with neural feature-based image reconstruction, to interpret the data and produce higher-quality images. “To recover images from the measured data, we propose a feature-based deconvolution method that employs a differentiable inverse filter together with neural networks for feature extraction and refinement,” said senior author Felix Heide, an assistant professor of computer science at Princeton.

“Optical metasurfaces rely on a new method of light manipulation, using cylindrical posts set on a small, square surface. The posts, which vary in geometry, work like antennas that can capture incoming photons (waves of electromagnetic radiation). These waves are then sent as signals from the metasurface to a computer to interpret and produce an image. The team tested machine-learning algorithms with a simulator, comparing different configurations of the antennas. With 1.6 million cylinders on the optical surface and complex light interactions, the simulations demand massive amounts of memory. “

“The team is now working to add more computational abilities to the camera and envisions features such as object detection and sensors for medicine or robotics in future iterations. Beyond that, they see a use case where ultra-compact imagers turn surfaces into sensors. “

More information is available for the Neural Nano-Optics for High-quality Thin Lens Imaging via the official webpage.