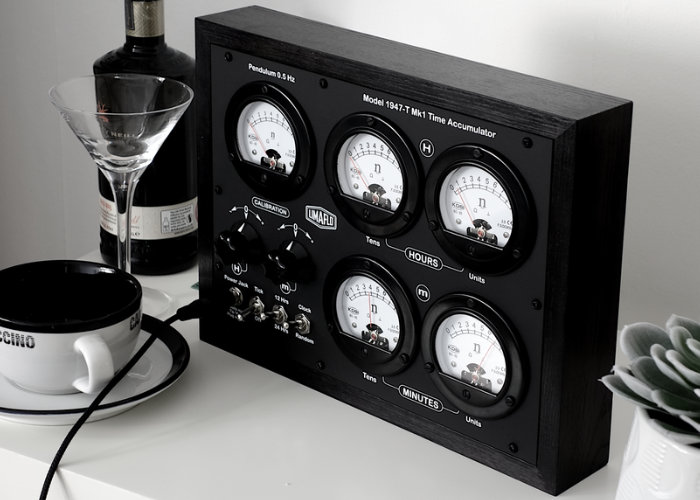 Ren Kitchener, two-time creator, designer and producer of analogue and digital Retro-Technical-Art has created a unique 1947-T Mk1 Time Accumulator clock. The clock has been launched via Kickstarter and is available to back with early bird pledges starting from £285. The 1947-T Mk1 is an authentic analogue-meter clock, housed in a Solid Wood enclosure, designed with “passion and lovingly constructed by hand” in Sussex, England.

“The idea behind the 1947 series, is to produce appealing, attention-grabbing, conversational (even educational) high quality electronic machines that operate, look, weigh and feel the same as they would have if they had been designed and made in 1947. Indeed – the meters are made from Bakelite and Glass (but not brass). The principle is exactly the same as reading a digital clock, but in a more interesting and fun way. “ 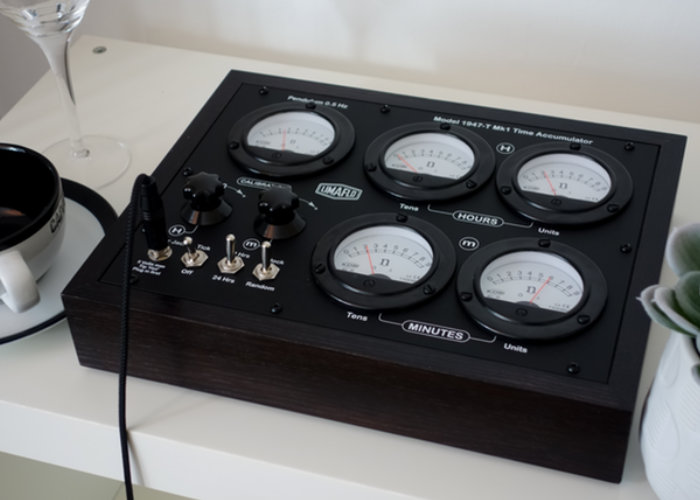 “It’s also an inspiring educational tool, due to the unique analogue meters and the way they work. The calibration function is highly addictive too – impossible to resist. The transistor and the double-sided plated through hole printed circuit board were invented in 1947, which are both used in the 1947 series. The sound barrier was also broken by Chuck in the Bell X-1, so a lot of amazing things happened in that year. Not to forget that the ‘universal machine’ (the computer) had already been developed at Bletchley Park, by Alan and his team, well before 1947. “

“Each unit is shipped with a 3-metre black fabric cable for connection into a USB port, power supply or ‘wall-wart’.  Any USB connector will work (the 1947-T only requires 0.04 Amps).   The connector for the 1947-T is via a classic 1/4 Inch Jack – which was originally used to carry simultaneous power and audio on two wires for telephone patching/exchanges (POTS).”

For more details and a full list of all available pledge options as well as instructions on how to tell the time using the unique dial system jump over to the official Kickstarter crowdfunding campaign page by following the link below.