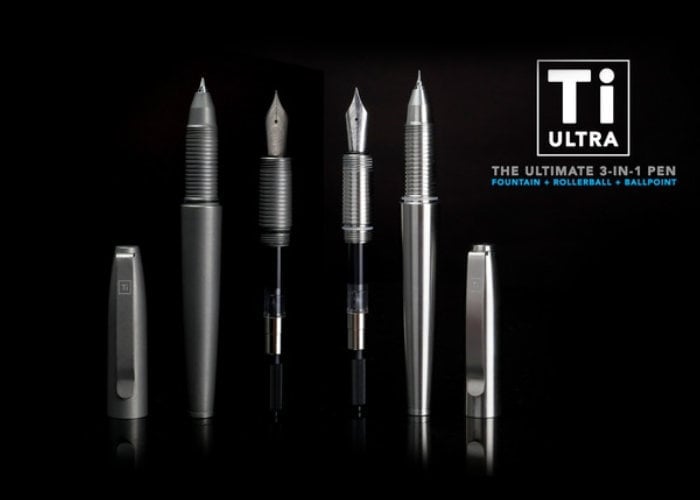 The Ti Ultra is a 3-in-1 Titanium pen that offers a fountain, rollerball and ballpoint pen in one instructed from grade 5 titanium the new writing instrument has launched via Kickstarter an already raised over $82,000 thanks to over 400 backers with still 35 days remaining on its campaign. Building on previous designs the entrepreneurial partnership between Chadwick Parker and Joe Huang have run 26 previous Kickstarter campaigns most of which have been fully funded. The team explain a little more about their latest creation.

“Our newest pen design is a solid grade 5 titanium pen that lets you dramatically transform and customise it to write exactly how you want. Plus it provides the freedom for you to explore, switch and drastically reconfigure your writing experience in only seconds.

We’ve always found it pretty frustrating that large pen companies essentially offer the same exact pens in 3 configurations. They usually sell a ballpoint, rollerball, or fountain pen version but you’re forced to pick one or buy multiple pens. Also, the parts and threads are rarely engineered to be cross-compatible so you do not have the flexibility to convert your existing pen to another style without buying an entirely new pen.

Although we understand why pen companies make you buy multiple versions of essentially the same pen ($$$), we wanted to design one titanium “chameleon” pen that provided the ability to be all three pen types without the 3x price tag or ever locking you into just one pen type.”

Pledges are available from $185 for roughly £141 offering a $55 saving off the recommended retail price which will take effect once the campaign comes to a close. If all goes well worldwide shipping of the Ti Ultra titanium pen is expected to commence sometime around October 2019.