So there’s this artist in Ukraine who recently outed a strange S&M mask/headgear that borrows from the facehugger aesthete. More than one blogger has opined that it’s a fitting sort of tribute to H.R. Giger, who conceptualized the original xenomorphs. Ah, H.R. Giger. The man’s a national treasure. 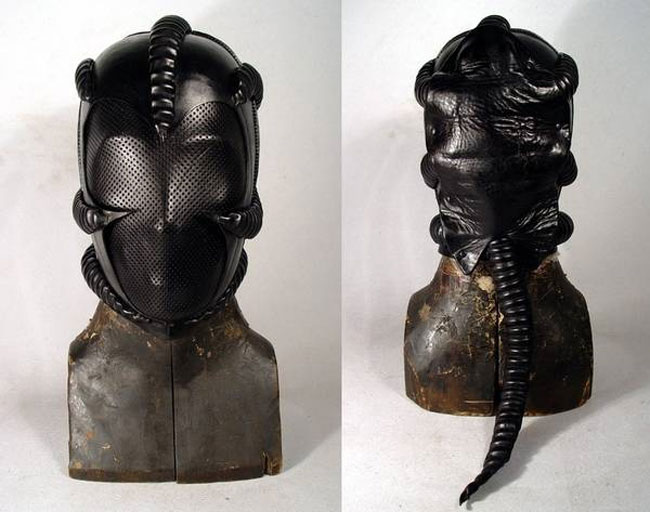 Of course, a smidgen of artistic license played out in this mask’s creation. Note the facehugger is on the back of the head and not, well, on the face. It still looks good though.

Since he’s at it, creator Bob Basset should do a whole line of clothing based on the Aliens saga. Who knows, it might make it to a runway. Somewhere. Wait, after checking his site, he does indeed churn out all these steam punk gas masks and gothic apparel. A master tailor is he, it seems. When they ever do a Fallout live action adaptation, he should do costumes for the world’s benefit.

This lovely piece of headgear also brings another villainous creature to mind. Not so much creature, but super evil superhuman, namely Bane from the Batman canon. The Chris Nolan take on the legendary archenemesis is more minimalist and quite a departure from the comic book.

This facehugger mask, on the other hand, looks Bane-appropriate. Just add those crimson patches over the eyes and a skullface. There’s even a tube (actually the facehugger’s tail) to deliver the superhuman fluid.