So there’s this dude named Steve who does something few people would even bother thinking about: he builds his own PC from scratch. Pictured below are the thousands of connectors he assembled by hand for a CPU.  You just gotta admire the dedication involved here. An compulsive tinkerer who likes to tackle big jobs, Steve kept a journal of his work on his website. 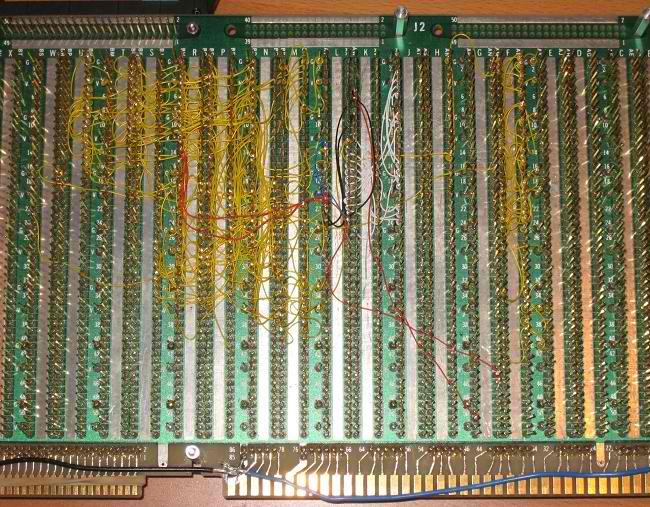 Below is a juicy chunk of excerpt about the Big Mess O’ Wires, the PC that took him almost three years to build (and then some):

Initial design began in November 2007 with a high-level sketch of the CPU internal design. A simplified Verilog hardware simulation proved the key design details. Construction began in earnest in February 2008, using a large wire-wrap board to interconnect the 50 or so chips needed. In April, a half-finished BMOW 1 booted up for the first time, computing fibonacci(12) = 144 using a simple ROM-based program. One by one the original system goals and stretch goals were met, including VGA video, three voice audio, BASIC, and a bootloader for communication with an attached PC. BMOW 1 eventually gained the ability to run complex programs written in assembly or compiled from C. The main construction phase ended in February 2009, with the completion of a customized case to house everything. As of March 2009, Big Mess o’ Wires 1 is fully functional, but will probably never be “finished”.

Bummer, right? Like a lot of great works of art, the BMOW will never truly be finished.

If you’re holding a cold one right now, or even just a can of root beer, raise it in honor of Steve. May his labors never end.