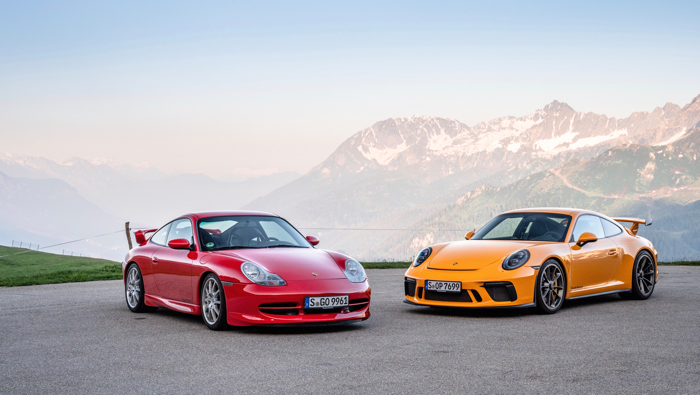 The first 911 GT3 was created on the Porsche 996 platform, there have been a number of different versions over the last 20 years.

Watch this video on YouTube.
The unveiling of the first Porsche 911 GT3 in March 1999 at the Geneva Motor Show signalled the start of a new era for discerning sports car drivers. Like no other Porsche 911, the GT3 embodies the hallmarks of Porsche Motorsport. Developed by two-time World Rally Champion Walter Röhrl, race engineer Roland Kussmaul and the Porsche Motorsport specialists from Weissach, the Porsche 911 GT3 brought race track agility to the road. Since then, this road-going athlete has become even faster, more precise and more dynamic with every generation — and with a naturally aspirated engine, manual transmission and rear-wheel drive, it remains the most popular Porsche 911 among purists up to the present day.

You can find out more details about the Porsche 911 GT3 over at Porsche at the link below.