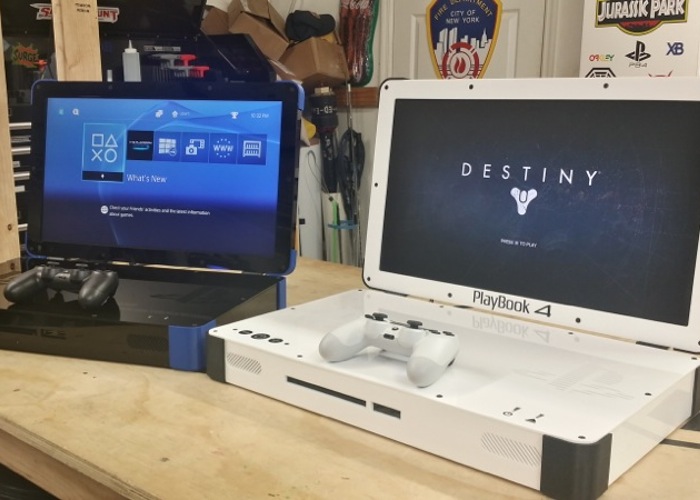 In the past we have featured the creations of Ed Zarick which have included the very unique Xbook which takes the form of an Xbox 360 laptop and the new Xbook One console laptop that include a next generation Xbox One console and is priced at $1500, and now a PlayStation 4 laptop.

This week Zarick has unveiled his latest PlayStation 4 laptop creation in the form of the PlayBook 4 which you might have guessed is built using Sony’s next-generation PS4 games console, converting it into a laptop games console.

The new PlayBook 4 PlayStation laptop is now available to purchase for $1,395, if you would like Zarick to provide a new PlayStation 4 console or just $1,095 if you are willing to post him your PS4 for the modification to take place.

The PlayBook 4 laptop is fitted with a 22″ Vizio 1080p LED LCD display which is combined with a customised case available in either black or white finishes. Other options for the PlayStation 4 laptop include a HDMI out connection which can be added for an extra $50 as well as international shipping for $75 extra. Watch the video below to learn more about the awesome mod and its design and specifications.

“Due to popular demand after the XBOOK ONE Laptop, I present to you the PLAYBOOK 4! This is the first PS4 Laptop out there and came out nice! Check out the video and www.playbook4.com for more information including ordering info!”

For more information on the new PlayBook 4 jump over to the official website for details.