Check out the The DasKeyboard Ultimate which has completely black keys.

Each of its 104 keys (105 in Europe) is devoid of letters, numbers, or special characters of any sort putting your touch typing to the ultimate test.
It also has a cool n-key rollover function which can give gamers/typists an edge as they are enabled to press up to twelve keys at a time. 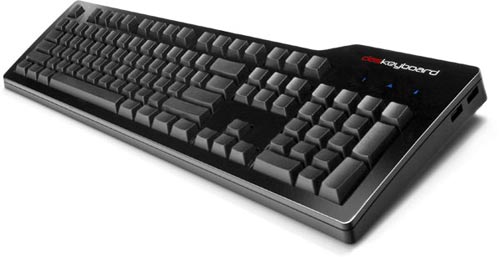 Never mind the fact that Das Keyboards are designed to be the best and fastest keyboards on the planet. Featuring German-engineered gold-plated mechanical switches, each key offers up a satisfying tactile and audible click when pressed

Once you start typing, the tactile and audio clicks create positive reinforcing feedback. It makes typing fun and addictive. Newly added blue LEDs provide a slick look and the new USB hub allows you to charge and sync your iPod or iPhone. Fast typists and gamers will be glad to hear Das Keyboard has an n-key rollover function allowing up to 12 keys to be pressed simultaneously. Finally, the new Das Keyboard has an extra long USB cable that fits through your desk grommet and keeps your workspace neat and tidy.

Whether learning to touch-type or already a touch typist, within a few weeks, you will memorize the character locations and you will be touch-typing like a pro without looking at the keys. It works each and every time. If you want to take your typing skills to the next level, Das Keyboard Ultimate is the keyboard for you.

The Das Ultimate keyboard is available to buy online for $129.99 from Think Geek.