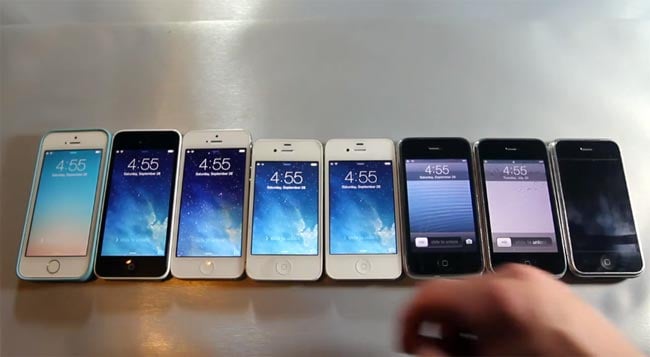 On the 29th of June 2007, Apple launched their first Apple iPhone, the handset has been made official at MacWorld in January 2007, and it finally launched in stores in the U.S. at the end of June 2007.

Things certainly have changed since the original iPhone was launched, the handset came with 4GB of built in storage, there was also an 8GB version available as well, and it came with iPhone OS as its operating system.

The original Apple iPhone didn’t have any games or third party apps, it just came with the apps that Apple had pre-installed on the device, when it launched there was no iPhone app store, and the handset didn’t even have 3G, it came with Edge on AT&Ts network. The video below show the late Steve Jobs introducing the iPhone at MacWorld back in January of 2007.

Apple launched the handset in the UK and other countries in November of 2007, and there have been a total of 8 different iPhone models, which include the iPhone, the iPhone 3G, iPhone 3GS, iPhone 4, iPhone 4S, iPhone 5, iPhone 5S and the iPhone 5C.

Mobile phones before the Apple iPhone were very different, BlackBerry and Nokia were the worlds top mobile phone makers, this certainly has changed, and now Apple and Samsung are top of the smartphone sales charts. The devices did not come with touch screens and this all changed with the introduction of the iPhone.

Apple managed to sell 6.1 million units of the original iPhone by June 2008, and we wonder if Apple knew how popular the device would become, as back in March this year they announced they had sold 500 million iPhones.