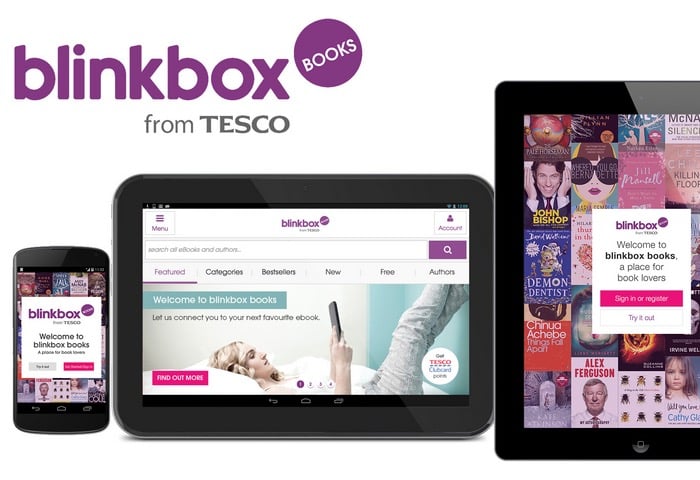 Following on from the sale of Tesco’s failing streaming music service Blinkbox Movies and its broadband services to TalkTalk earlier this month.

Tesco’s has today confirmed that it will now be closing its e-book service Blinkbox Books after discussions with Waterstones failed to reach a final agreement for the service.

A Tesco’s spokesperson today explained : “We have taken the decision to close our e-book service Blinkbox Books,”-“The service will close by the end of February.”

Even though the Blinkbox service had millions of users unfortunately Tesco’s could not transform the failing business into a profitable venture with competition from the likes of iTunes and Amazon. Even after acquiring a number of additional services to bolster Blinkbox’s services such as Andy McNab’s e-book platform, Mobcast, for £4.5 and Peter Gabriel’s We7 for £10.8 million back in 2012. TalkTalk explained during the announcement of their purchase of Blinkbox :

“Blinkbox is one of the leading on-demand providers of pay content in the UK and works across multiple platforms and devices – both inside and outside the home.  blinkbox’s established technical expertise in multi-platform, multi-device content delivery and incremental content relationships are highly complementary to TalkTalk’s existing strategyof being the best value for money TV provider in the UK, offering customers flexible access to the widest range of free and paid for content.

TalkTalk TV is already the fastest growing TV platform in the UK with over 1.2 million customers and blinkbox will help accelerate the development of our platform by delivering a number of key initiatives significantly faster, such as offering a TV app to customers for in and out of home access to paid-for content across a range of devices.”