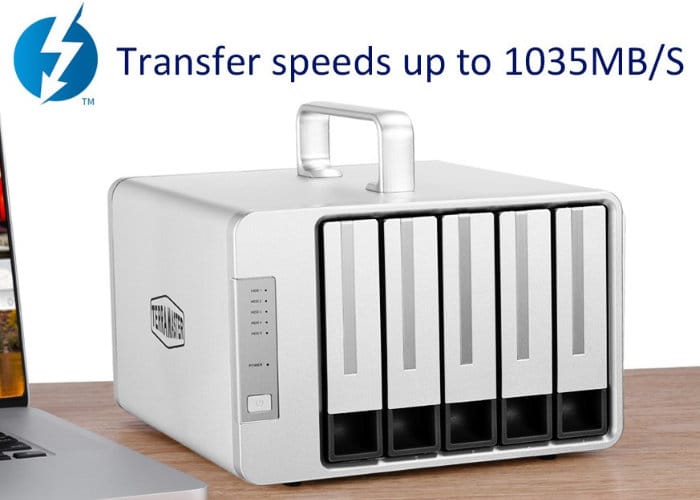 This week hardware and storage manufacturer TerraMaster has launched their very first 5-Bay D5 Thunderbolt 3 RAID storage system. The TerraMaster’s D5 storage is equipped with the latest Thunderbolt 3 technology, with a transmission rate of up to 40 Gbps with actual read and write speeds reaching up to 1035 MB/s. The five base storage device is also equipped with a high-efficiency heat-control system, built in with intelligent temperature-controlled fans.

Other features include a Thunderbolt 3 dual interface and DisplayPort interface, enabling users to connect connect 5 Thunderbolt 3 devices or display devices simultaneously. Using theDisplayPort owners can also connect the storage to external 4K high-resolution screens as a refresh rate of 60 Hz. “The D5 Thunderbolt 3 employs a powerful hardware RAID controller to support multiple RAID modes, including RAID 0, 1, 3, 5, 10, Single, JBOD, and so on. In addition, it supports RAID5 backup technology and the hard disk hot-swap design, which permits the automatic restoration of hard disk data after being replaced, greatly improving data security. Moreover, the two Thunderbolt interfaces also support a 15W power output, which means that when laptops and other devices are connected to the D5, they can deliver power while transmitting data. “

For more information and full specifications jump over to the official TerraMaster website where the new D5 Thunderbolt 3 storage system is available to order with prices starting from £700 and offering up to 60 TB of capacity.