Zenta a has recently posted on the Trossen Robotics forums his robotic creatures inspired by Mech warfare. The image below shows the his  range of  robotic creations T-Hex, A-Pod and Phoenix. Check out the video of the T-Hex after the jump. 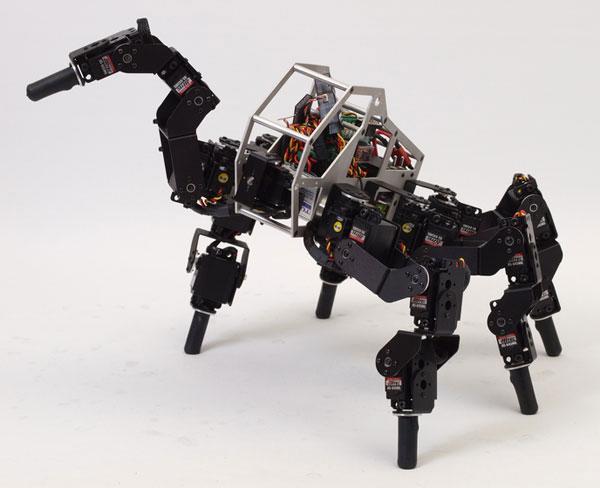 The major reason for starting this project was that I wanted to make a hexapod with 4 DOF legs. The joint are called coxa, femur, tibia and tars. You may ask why I choosed to add an extra joint (the tars)? First of all this is more like an experiment and a proof of concept. A 3. link to the 2 link IK chain (femur + tibia) gives us an endless amount of IK solutions. So like a robot arm the tarsus act as an end-effector. The IK calculations are relative easy if the tarsus are defined to stay in a perpendicular position in relative to the ground. I’m using a variable called TarsToGroundAngle and as a reference I’ve set the perpendicular position to be TarsToGroundAngle = 0 deg (not 90 deg).