Surfing has just gotten a much deserved boost thanks to efforts by two Spanish companies who want that competitive edge during competitions. Tecnalia and Pukas have collaborated to create the Surfsens, a board that has built in flash memory so its performance on the waves can be assessed. 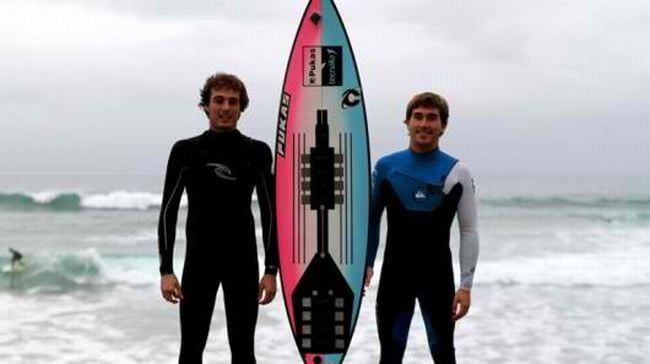 Though such innovation might strike surfing purists as a violation of the art form/sport’s integrity, the Surfsens concept (it has yet to debut in a shore near you) is still being tested. The reason behind the radical upgrade of a regular board is to give professional surfers super high-tech gear at their disposal during competitions. Think somewhere along the lines of F1 or fencing where precision technology plays an increasingly visible role.

Aside from its flash memory, the Surfsens has a bunch of embedded sensors like a gyroscope, GPS compass, accelerometer, and strain gauges to deliver the absolute limit when man and wave do battle. As the photographic evidence above indicates, the Surfsens is paying its dues at the moment in a beach somewhere.

So yes, the Surfsens and similar projects are bent on giving pro surfers the cutting edge in the competitive realm but those inclined to keep the action between a sex waxed board and a human body will probably shun this wave-riding gadget.