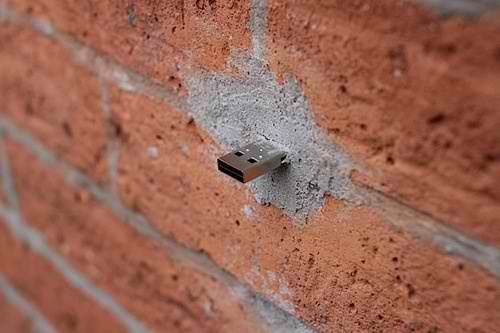 Here are the official words of explanation from Aram Bartholl’s own blog:

“‘Dead Drops’ is an anonymous, offline, peer to peer file-sharing network in public space. I am ‘injecting’ USB flash drives into walls, buildings and curbs accessable to anybody in public space. You are invited to go to these places (so far 5 in NYC) to drop or find files on a dead drop. Plug your laptop to a wall, house or pole to share your files and date. Each dead drop contains a readme.txt file explaining the project.”

In case you’re an NYC resident and are attracted to such flagrant public use of USBs, here are the not-so-secret locations:

In our case, while the novelty of anonymous off grid file-sharing has its appeal, the evil potential of viruses and hacks might turn these once benign USBs into time bombs waiting to get stuck on some unlucky laptop.