As we mentioned earlier, a number of iPhone 4 owners are having reception issues with the iPhone 4 when it is held in a certain way. Apple released an official statement which basically told users not to hold their iPhone 4 in a certain way.

Rory Sinclair decided to email Apple’s CEO, Steve Jobs and he was basically told that he was holding his iPhone 4 wrong, you can see the full email exchange below. 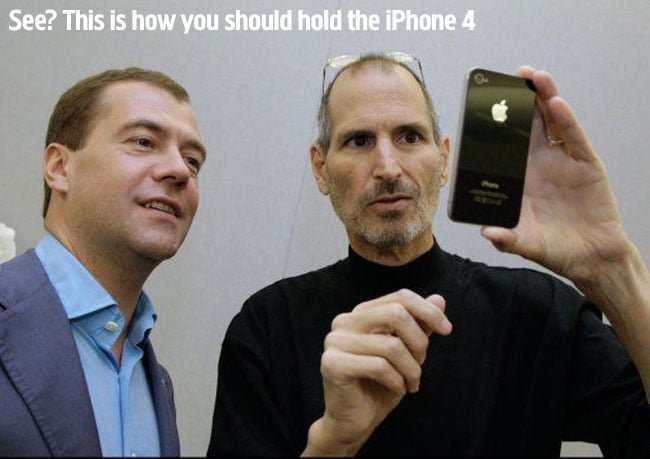 So, um, just got my iPhone 4. Its lovely and all, but this ‘bridge the two antennae to kill your reception’ thing seems to be a bit serious. If I bridge them with my hand or with a piece of metal the bars slowly drop to ‘Searching…’ and then ‘No Service’.

Its kind of a worry. Is it possible this is a design flaw?

Rory then sent Steve Jobs another email which you can see below, along with Steve Jobs’ reply.
I texted someone from the phone and noticed reception dropping as I texted, down to ‘No Service’, so I emailed again:

Actually, its not calls that concern me, but i’ve just been writing a text and its very natural for me as a right-handed person to hold it that way, with the part of my hand at the base of my thumb covering the point the antennae meet, and it kills the reception each time.

I mean, pretty much as soon as i move my hand it comes back, but its pretty crazy… is this the reason Bumpers exist?

Just don’t hold it that way then.

Well, yeah, thats what i’ll do, but you have to admit thats a workaround, yeah? I mean, normally there aren’t limits to how you can hold a phone.

I seriously dig the phone, its totally amazing, but I think this is what many would call a design flaw.

Sure there are – every phone has these areas of sensitivity, depending on the location of the antenna. Some phones even ship with labels warning customers to not cover certain areas with their hands.

So there you go guys, if you are having reception problems with the iPhone 4, then according to Steve Jobs you are holding your iPhone 4 wrong.