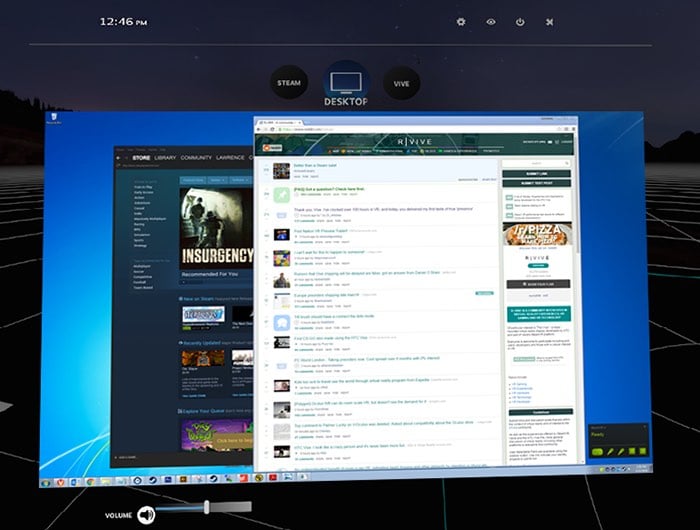 Following on from the previous announcement by Valve that users of the HTC Vive virtual reality headset would be able to view their desktop operating system within the virtual reality environment.

Valve has this week released a new update to its SteamVR software, which brings with it two new features in the form of The Steam Desktop Overlay and a Steam Workshop for SteamVR backgrounds.

The new SteamVR update is available for anyone who opts-in to the Steam Client Beta and the SteamVR Beta. Valve explains more about the new features over on the official SteamVR community pages.

The Steam Desktop overlay displays the contents of your desktop in the VR Dashboard. There are many occasions in VR when you need to see what’s going on with your computer but don’t want to take off the headset to do it. With the desktop overlay your desktop appears on a giant virtual screen and you can navigate and click with your Vive controllers.

This overlay tab is built into Steam, so all you have to do is run SteamVR and press the system button on a Vive controller to see it. In addition, there is now a workshop to allow you to share SteamVR backgrounds with other users. Create backgrounds using the Lat Long (aka equirectangular) format and upload them via the workshop option in the SteamVR menu. Other SteamVR users can then rate and download your images to change the appearance of the SteamVR background. Once you’ve downloaded a background, you can select it easily using settings in the VR Dashboard.

For more information on the new SteamVR update jump over to the SteamVR blog website for details via the link below.