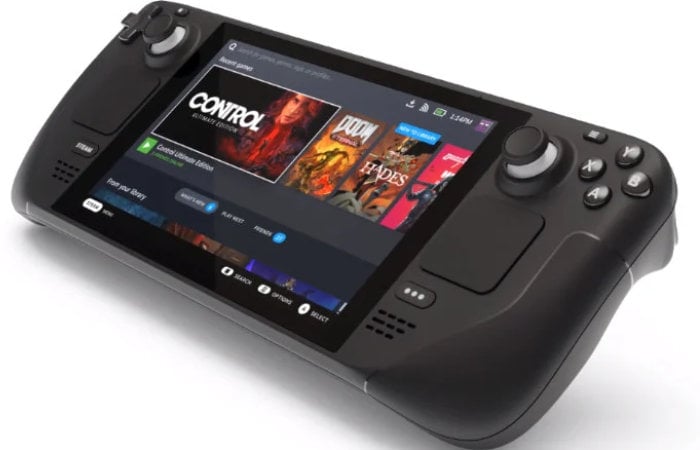 Valve unveiled their new Steam Deck handheld games console in the middle of July 2021 and has this week allowed reviewers a first hands-on experience with the new console allowing them to put it through its paces. One such reviewer was Linus from Linus Tech Tips who has kindly published his hands-on experience via his YouTube channel. Providing us with his first thoughts on the Steam Deck and a few statistics from tests he was able to carry out in the short time he had with the console.

Steam is expected to launch the Steam Deck later this year during December 2021 pricing it from $399 in the USA and from $349 in the UK for the 64 GB version with 256 GB and 512 GB NVMe SSD internal storage systems also available priced at £459 and £569 respectively. As you will see in the video below you can easily connect external peripherals to the handheld console as well as connect it to your large screen TV or small USB-C portable monitor allowing you to enjoy the latest AAA games wherever you may be. Valve has officially announced a shipping date for their Steam Deck for February 2022

Valve partnered with AMD to create Steam Deck’s custom APU a Zen 2 + RDNA 2 optimized for handheld gaming, “delivering more than enough performance to run the latest AAA games in a very efficient power envelope” says Valve. Featuring an IMU and capacitive touch thumbsticks on-board, Steam Deck allows you to control your games in a number of different ways depending on your play style.

“The Steam Deck console brings the Steam games and features you love to a powerful and convenient form factor that you can take wherever you go. With an IMU and capacitive touch thumbsticks on-board, Deck helps you aim better. By physically positioning the device you can achieve more precision than using a thumbstick or trackpad alone. Type and swipe through the Steam UI with Deck’s capacitive multi-touch display.”