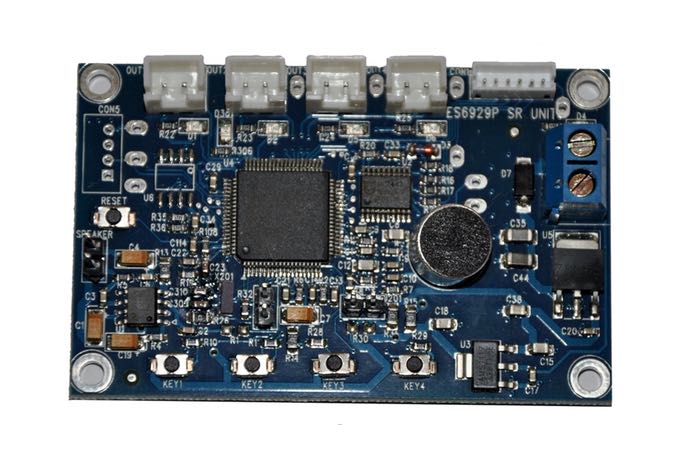 Arduino developers, makers and hobbyists that would like to add Arduino speech recognition to their projects may be interested in a new development board created by serial Kickstarter campaigner Patrick Thomas Mitchell.

Patrick has developed a number of electronic projects that have successfully launched following the Kickstarter crowdfunding website. With his latest enabling users to set out an ES6929P Arduino compatible speech recognition unit in just a few minutes.

The computer or phone is needed and the Arduino speech recognition board is easily programmed and then can be reprogrammed with new voice commands whenever required. Watch the video below to learn more about the ES6929P from its maker, who explains :

“The ES6929P is capable of saving up to four 1.25 second speech commands at a time. You can reprogram these commands at any given time with ease!  It only takes a minute!  Best of all, the ES6929P talks to you!  It takes you through the training process, and lets you know which operating mode you are in.

You can unplug the speaker at any point in time at no consequence to operation. The speech command information is saved into an on-board EEPROM chip, which allows for the user to power off the device, and power it back on without having lost command data. When a programmed command is recognised by the device, the corresponding output pin will go from 0-5v for roughly 1.25 seconds, then back down to 0v.

It is TTL compatible and it works well with PICs, Arduino, Stamp, and other digital projects.  You can easily make the outputs compatible with Raspberry Pi using a resistor divider.  We will be offering instructions on how to do this in the written user-manual!  Simply program in your four commands, connect the outputs to your external circuitry, and you are off to the races!”

For more information on the new Arduino Speech Recognition standalone board jump over to the Kickstarter website for details and to make a pledge from $68 CAD.