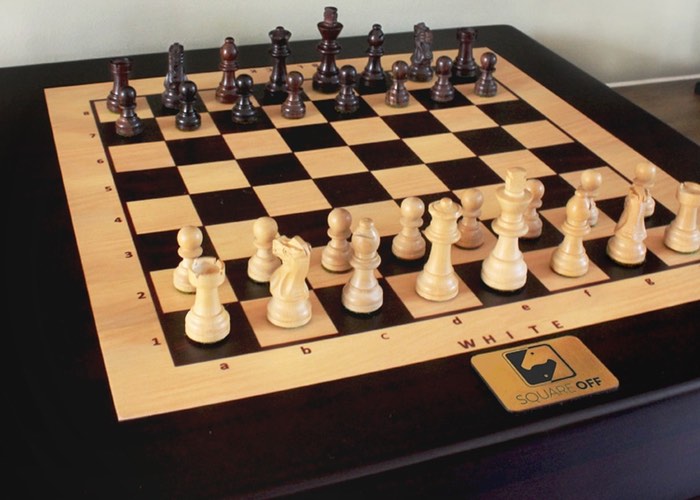 Playing chess on a computer or mobile device using an app doesn’t provide the same experience as playing an opponent at a table with a physical chess set. Alessandro Didonna and his team of developers are trying to change this with the creation of Square Off.

Square Off is the world first chess computer that can automatically move individual pieces around the board whilst playing. Watch the demonstration video below to learn more about this unique chess set.

The development team behind Square Off are looking to raise €45,000 over the next 30 days and have already raised €40,000 thanks to over 165 backers. Pages for the Jetset start at €179 for super early bird backers.

We know that there’s nothing like playing a game of chess on a real board. But, let’s face it. It’s a busy world, people stay miles away from each other and even if someone wants to come over to play, it requires a hell lot of planning. Phew! Too much effort. Result, you give up and end up playing chess online. How boring.

Square Off is all set to redefine the world of board games, starting with chess. Bringing to you the world’s smartest, most connected and the most evolved chess board. It enables you to play your favourite game against a fellow chess enthusiast from anywhere in the world. The automated board is designed to reflect the move of your opponent with precision. Not just that, you can challenge the artificial intelligence of the board too.

Yes, Square Off is here to bring back those charming old days when people played chess on classic tangible boards. Felt chess from their heart, indulged in the luxury of playing with wooden boards and handcrafted chess pieces. Where on one hand, it has revived the classic charisma of chess, on the other hand, Square Off has also made it smarter, automated and super fun.

Want to play a game of chess with someone who is as passionate? Possible. What if that person is sitting far away? Possible. What if he doesn’t have the same board? Still possible. Now, what’s not possible is to have an excuse for not playing your favourite game.