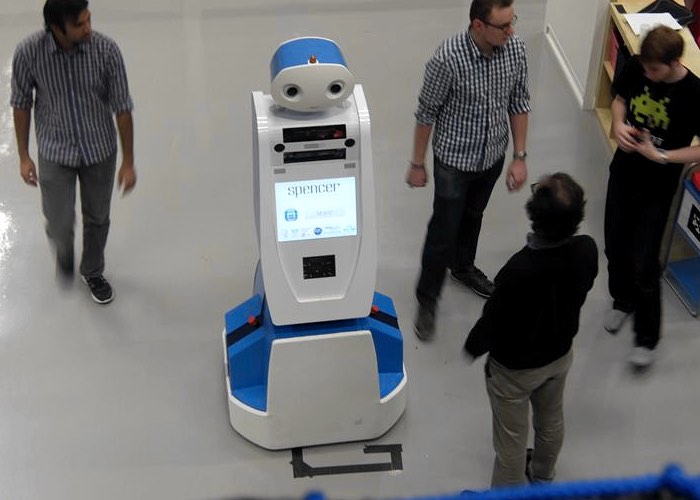 A new project is being tested at the Schiphol international airport in Amsterdam this month, that takes the form of a friendly robot called Spencer. Who has been designed to help passengers find their flights in the huge airport.

With the help of Spencer, passengers will be able to asked directions to their terminal and hopefully Spencer will reduce the number of passengers missing their flights.

Spencer has been designed by researchers at Örebro University in Sweden who have enabled the smart robot to map its surroundings. The project is funded by the European Commission and is a collaboration between researchers and businesses in 5 different countries. The research team explains more about the Spencer Robot project :

Over the course of one week, starting on 30 November 2015, the robot will be tested in the hustle and bustle of the major international airport Schiphol. After the test run, adjustments will be made in preparation for the real test in March when representatives of the European Commission, along with other prominent guests, will be attending the official premiere run.

The stately looking robot with its friendly but unstirring “face” will be guiding passengers, unaccustomed to navigating international airports, from one gate to another. Researchers from Örebro have equipped the robot with a prerequisite for navigation – maps. The robot then surveys its surroundings by measuring the distance to various obstructions using laser beams.

One of the more basic maps is one that involves fixed obstructions, such as walls.

– People in motion are not that tricky either. Objects that are temporarily permanent so to speak, are the most difficult to work around. We do not know, for instance, how long that luggage trolley will be parked in a particular spot, which makes it harder for the robot to determine its own location. We are working on a general map representation that includes and allows the robot to handle temporarily permanent objects, says Achim Lilienthal.

All the theoretical components of the robot’s ability will be fused into one system in the upcoming integration week. In addition to the Örebro University researchers’ contribution, another aspect of the project is the robot’s ability to understand human behaviour and act accordingly. Things like navigating around a group of people rather than squeezing through, or looking around to see if the group it is guiding is keeping up.

To find out more information about this interesting project jump over to the Örebro University website via the link below.