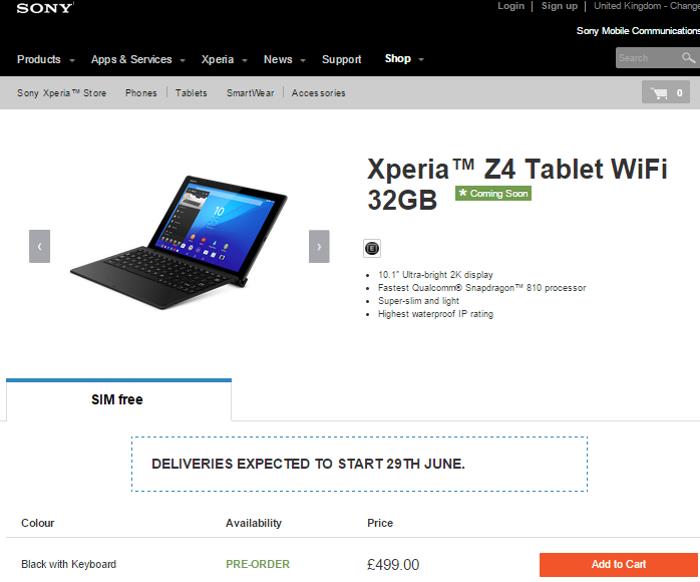 Sony Xperia Z4 Tablet is available for pre-orders in the UK, but customers who are waiting for its arrival may have to wait a little longer.

The delivery date for the Sony Xperia Z4 Tablet in the UK has been pushed back to June 29th on the last moment.

Not too long ago, the the shipment date was pushed back to June 17th, as spotted by the folks at Android Police, but that was for the LTE version of the tablet which is no longer listed on Sony UK website at the time of writing. There’s no word about the reason for delay, but you have to wait for a few more weeks if you’re saving up for the Xperia Z4 tablet.

The tablet offers top-of-the-line specifications on board, including a 10.1-inch display sporting a resolution of 2,560 by 1,600 pixels, a quad-core Snapdragon 810 processor paired with 3GB of RAM and 32GB of storage. There’s a 8.1MP camera for photos and videos, a 5.1MP front-facing camera, a 6,000 mAh battery and ships with Android 5.0 Lollipop as its operating system. It costs GBP 499 in the UK, which is quite expensive, but gadgets are usually expensive in the UK compared to the rest of the world.

Anyone interested in picking up the Sony Xperia Z4 Tablet when it launches in the UK?