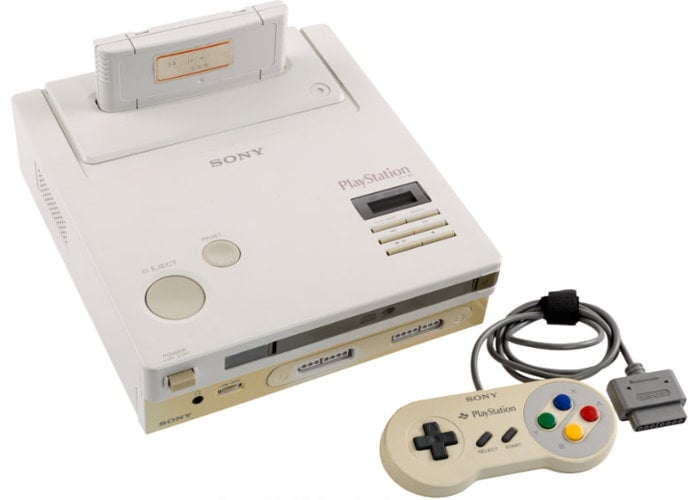 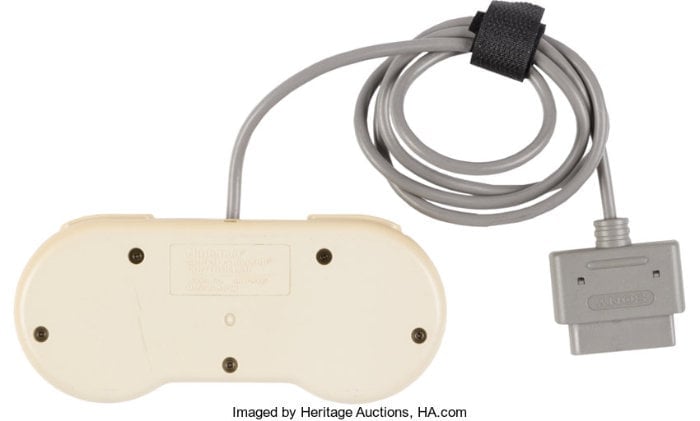 “Nintendo Play Station Super NES CD-ROM Prototype – Sony and Nintendo c. 1992. At one point, this dual-branded prototype’s existence was mere myth, and this is the very first time it will ever be offered at public auction. It is said to be the last remaining prototype of the alleged 200 that were forged from the failed joint-venture between Sony and Nintendo, two of the biggest competitors in the home console video game market. Reportedly, the other prototypes have since been destroyed. We at Heritage can attest the prototype is working, as we’ve played a couple of rounds of Mortal Kombat on it using a Super Famicom cartridge.

The prototype does share some exterior similarities with both the Super Nintendo and the Sony PlayStation, but it has its own, unique characteristics as well. It has not only a slot for Super Famicom and Super Nintendo games, but a CD-ROM drive that was meant to play disc-based media and presumably video games as well. Though the CD-ROM drive was not currently working when it was found in 2009, it has since been repaired by Benjamin Heckendorn, a YouTube personality known for his console repair videos. It now has the ability to play music CDs like the commercially produced PlayStation, but there is no proprietary software that’s known to have been made during the prototype’s development.

The prototype’s small screen on the top of the console shows the user which music track is currently being played from the CD, allowing the user to listen to his or her own music and play a cartridge-based game at the same time. It also has a headphone port and independent volume dial on the front of the console, to the left of the two controller ports. Turning the console over to look at the bottom, it has a label with what appears to be a handwritten “2.” The meaning of this number is unclear. Looking at the back of the console, it has standard AV Out, S-Video, and the Super Nintendo’s Multi-out ports. However, it also has a mysterious port simply labeled “NEXT,” and its purpose is considered to be unknown.”