Sony D6503 Sirius has leaked quite a few times in the past few weeks, making rounds of appearances on the XDA-Developers forum.

Recently, the purported Sony D6503 Sirius posed for the camera, showing us what it would look like in terms of design alongside the Xperia Z1 and Xperia Z. 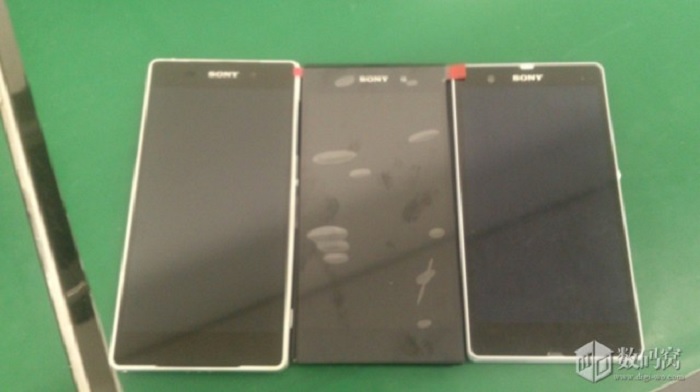 As it can be seen from the image above, the purported Sony D6503 Sirius appears to be bigger than both the Xperia Z1 and Xperia Z in terms of size. Sony Xperia Z measures 139 x 71 x 7.9 mm while the Xperia Z1 is 144 x 74 x 8.5 mm in terms of dimensions. Sony Sirius appears to be slightly bigger than both of them, thus adding more weight to the rumor that it will come with a 5.2-inch display.

It seems the handset will launch in both black and white colors as well, with the expected launch date pegged for April, according to the leak. Sony’s press event will take place on the first day of the big event on February 24th, and we’re expecting Sony will introduce the upcoming flagship device there with its launch in April, hopefully.

Based on rumors, the handset will come with a 5.2-inch display sporting 1080 resolution, although we’re expecting 2K, a quad-core Qualcom Snapdragon 800 SoC (MSM8974AB), 3GB of RAM, 32GB internal storage, 20.7 megapixel  rear camera for photos and videos, 2.1 megapixel front-facing camera and will possibly launch with Android 4.4.2 KitKat pre-installed out of the box.

We’ll update you as more information comes up.