Over the weekend, we saw some leaked images of the Sony Sirius with model number D6503, also rumored to be the upcoming Sony Xperia Z2. The leaked images showed us the possible design of the alleged handset, which looks quite similar to the Xperia Z1.

Recently, some specifications of the alleged Sony Sirius have been confirmed, thanks to the folks at XDA-Developers forums. Based on this new rumor, the handset rocks a 5.2-inch display sporting a resolution of 1920 x 1080 pixels. Although the hardware information shows the screensize to be 4.86-inch, but that’s without the on-screen buttons. 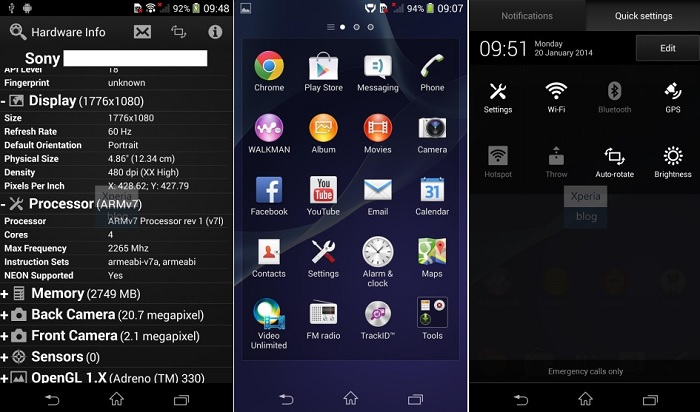 Under the hood, the handset is expected to come with a quad-core Qualcomm MSM8974AB chipset, also known as Snapdragon 800, with a clock speed of 2.3GHz and Adreno 330 GPU.

Other features include 3GB of RAM, 32GB internal storage, 20.7 megapixel  rear camera for photos and videos, 2.1 megapixel front-facing camera and will possibly launch with Android 4.4.2 KitKat pre-installed out of the box. Although the handset in the screenshot is running Android 4.3, but it’s an old build and will launch with KitKat on board so the UI will be different, according to the folks at Xperia Blog.

There’s no confirmation if Sony Sirius is the Xperia Z1, but we’ll definitely find out more about the handset as its rumored to make an official appearance at the Mobile World Congress next month.

We’ll update you if there’s more information about the alleged handset, along with Sony Canopus, which might show up in Barcelona next month.